A market correction in the fourth quarter, spurred by a number of global macroeconomic concerns and rising interest rates ended up having a negative impact on the markets and many hedge funds as a result. The stocks of smaller companies were especially hard hit during this time as investors fled to investments seen as being safer. This is evident in the fact that the Russell 2000 ETF underperformed the S&P 500 ETF by 4 percentage points during the first half of the fourth quarter. We also received indications that hedge funds were trimming their positions amid the market volatility and uncertainty, and given their greater inclination towards smaller cap stocks than other investors, it follows that a stronger sell-off occurred in those stocks. Let’s study the hedge fund sentiment to see how those concerns affected their ownership of HCP, Inc. (NYSE:HCP) during the quarter.

Is HCP, Inc. (NYSE:HCP) going to take off soon? Investors who are in the know are getting more bullish. The number of long hedge fund positions improved by 5 in recent months. Our calculations also showed that HCP isn’t among the 30 most popular stocks among hedge funds. HCP was in 25 hedge funds’ portfolios at the end of September. There were 20 hedge funds in our database with HCP holdings at the end of the previous quarter.

At the moment there are a large number of metrics market participants use to size up their holdings. Two of the most useful metrics are hedge fund and insider trading interest. Our researchers have shown that, historically, those who follow the top picks of the top fund managers can trounce the S&P 500 by a very impressive margin (see the details here).

How have hedgies been trading HCP, Inc. (NYSE:HCP)?

At Q3’s end, a total of 25 of the hedge funds tracked by Insider Monkey held long positions in this stock, a change of 25% from the previous quarter. The graph below displays the number of hedge funds with bullish position in HCP over the last 13 quarters. With hedge funds’ positions undergoing their usual ebb and flow, there exists a select group of noteworthy hedge fund managers who were increasing their holdings considerably (or already accumulated large positions). 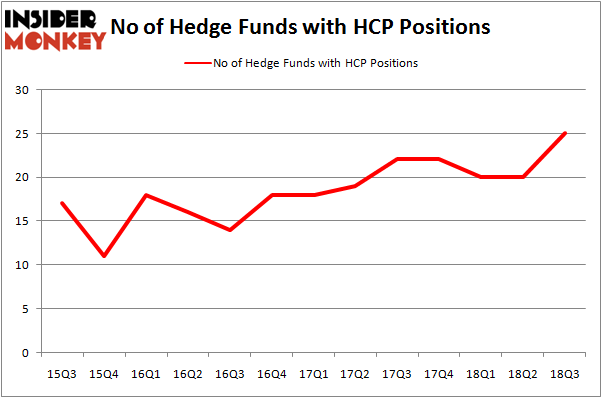 The largest stake in HCP, Inc. (NYSE:HCP) was held by AEW Capital Management, which reported holding $132.5 million worth of stock at the end of September. It was followed by D E Shaw with a $77.1 million position. Other investors bullish on the company included Citadel Investment Group, Echo Street Capital Management, and Carlson Capital.

As one would reasonably expect, key money managers were breaking ground themselves. Two Sigma Advisors, managed by John Overdeck and David Siegel, initiated the most valuable position in HCP, Inc. (NYSE:HCP). Two Sigma Advisors had $3.7 million invested in the company at the end of the quarter. Josh Donfeld and David Rogers’s Castle Hook Partners also initiated a $3.4 million position during the quarter. The following funds were also among the new HCP investors: Jeffrey Talpins’s Element Capital Management, Ray Dalio’s Bridgewater Associates, and Mike Vranos’s Ellington.

As you can see these stocks had an average of 21.25 hedge funds with bullish positions and the average amount invested in these stocks was $957 million. That figure was $374 million in HCP’s case. HEICO Corporation (NYSE:HEI) is the most popular stock in this table. On the other hand Cenovus Energy Inc (NYSE:CVE) is the least popular one with only 13 bullish hedge fund positions. HCP, Inc. (NYSE:HCP) is not the most popular stock in this group but hedge fund interest is still above average. This is a slightly positive signal but we’d rather spend our time researching stocks that hedge funds are piling on. In this regard HEI might be a better candidate to consider a long position.