Hawaiian Holdings, Inc. (NASDAQ:HA), the parent company of Hawaiian Airlines, is my top long-term pick in the airline sector because of its unique combination of growth and value. Hawaiian Airlines’ strategy is oriented toward bringing tourists to Hawaii for vacation. To that end, the company is rapidly expanding into high-value markets in Asia and Oceania. As a result, Hawaiian posted 19% revenue growth last year, and the company is expected to grow by 15% and 11% in the next two years, respectively.

In spite of these solid growth characteristics, Hawaiian trades for less than six times trailing earnings. While Hawaiian’s stock rallied in late 2012, a prominent analyst downgrade and weak Q4 earnings have driven shares down by nearly 20% since early January. 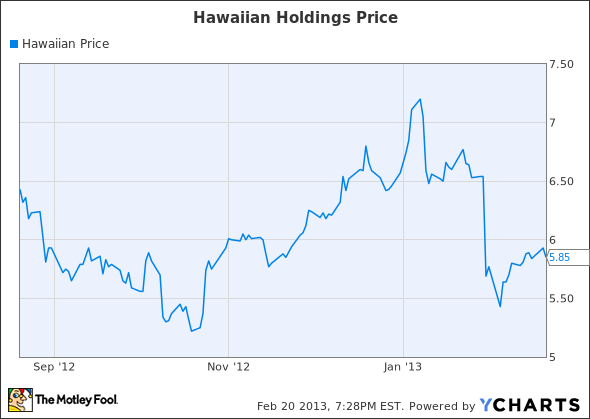 This has created an attractive entry point for long-term investors. As I will discuss later, earnings volatility is a natural consequence of Hawaiian’s rapid growth, but the company’s long-term earnings prospects are very good.

Recent performance
In 2012, Hawaiian performed very well in the first half of the year, posting EPS of $0.21 after losing money in the first half of 2011. However, the company began to hit turbulence in Q3, before suffering a disappointing Q4 loss. Hawaiian cut its Q3 unit revenue guidance in the middle of that quarter, and then had to do the same thing in Q4. Moreover, last month the company projected a high-single-digit decline in unit revenue for the current quarter.

With this recent string of revenue disappointments, it would be natural for investors to wonder whether there is a flaw in the Hawaiian Airlines business model. However, there are two key factors to keep in mind. First, Hawaiian’s recent expansion has focused overwhelmingly on long distance international routes. These long distance routes generate significantly lower unit revenues compared to Hawaiian’s corporate average, but they also have lower unit costs. Thus, excluding fuel and special items, Hawaiian Airlines achieved a 6% reduction in unit costs last year.  Lower unit costs should fully offset lower unit revenue from these routes over time.

Second, Hawaiian faced overcapacity on a number of its routes last year, which drove down fares. These capacity increases were driven primarily by Alaska Air Group, Inc. (NYSE:ALK)‘s  rapid expansion in the West Coast-Hawaii market and Hawaiian’s own growth, and to a lesser extent by Allegiant Travel Company (NASDAQ:ALGT)‘s entry into that market. However, all three carriers have realized that they expanded West Coast-Hawaii capacity too quickly and have pared back their growth plans for 2013. Beginning this spring, a more rational level of industry capacity should improve pricing power for Hawaiian and its competitors on West Coast-Hawaii routes.