The thing about the toy industry is that it has continued to thrive despite a tough economic environment, outperforming the S&P 500 nicely over the last twelve months. 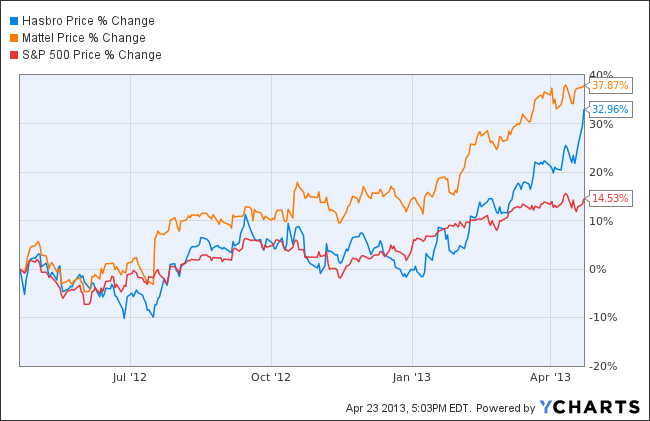 I think toymaker Hasbro, Inc. (NASDAQ:HAS) might still have room to go higher, and eventually outpace chief competitor Mattel, Inc. (NASDAQ:MAT). Hasbro posted first quarter earnings of $0.05 cents per share, one cent above estimates, on the back of $663 million in revenue, also topping expectations for $639 million.

One of the big headwinds for Mattel is the transition from toys to electronic gadgets and games. Yet, one of the big initiatives for Hasbro is the fact that the company is forming strategic partnerships with gaming companies. This includes its multi-year strategic agreement with Electronic Arts Inc. (NASDAQ:EA).

I like Hasbro, Inc. (NASDAQ:HAS)’s greater focus on entertainment, and the once weak games and puzzle category, which is yielding growth through several partnerships. The company has a cost savings program to deliver $100 million in savings annually by 2015, which includes a 10% reduction in workforce, facility consolidation and the implementation of process improvements.

On the other hand, Mattel, Inc. (NASDAQ:MAT) has been focusing on building new franchises and optimizing entertainment partnerships. Mattel has alliances with entertainment powerhouses like Disney, Pixar, Warner Bros. and Nickelodeon. One plus for Mattel is that it recently renewed its multi-year global licensing partnership with Nickelodeon in March 2012 to develop toys based on Nickelodeon s pre-school programs.

Even still, Hasbro, Inc. (NASDAQ:HAS) is on its heels, also seeking to expand its brand to television. Hasbro has a 50% interest in a joint venture with Discovery, The Hub, which operates a TV network in the U.S. The other notable headwind for Mattel, Inc. (NASDAQ:MAT) is its core Fisher-Price brand. The segment was down considerably in 1Q 2013 and management has no plans to put out new products before the second half of 2013.

Going into 2013, Hasbro had some of the best increased hedge fund interest, where there was a 25% increase in hedge funds owning the stock from the third quarter. This includes its top hedge fund owner Tom Russo’s Gardner Russo & Gardner and number two owner, billionaire Israel Englander’s Millennium Management.