Don’t look now, but the stock market may have finally woken up and realized that Amazon.com, Inc. (NASDAQ:AMZN) stock isn’t all its cracked up to be. Growth has slowed, profits don’t exist, and a focus on adding more and more services to Prime is a recipe for bigger and bigger losses.

Yesterday, Amazon.com, Inc. (NASDAQ:AMZN) announced a big investment in content for Prime users. The company is licensing 250 TV seasons of Nick Jr., Nickelodeon, MTV, and Comedy Central from Viacom in an effort to become a major competitor to Netflix, Inc. (NASDAQ:NFLX). The terms of the deal weren’t released, but for a proxy, Netflix, Inc. (NASDAQ:NFLX) is reportedly spending $300 million per year for The Walt Disney Company (NYSE:DIS) content. It’s reasonable to assume the Viacom deal will cost tens of millions of dollars per year. Add to that the five new original series given the green light last week, and we could see hundreds of millions in new costs next year.

The problem for investors is that the cost of Prime is going up, and there’s little evidence Amazon.com, Inc. (NASDAQ:AMZN) will ever turn Prime’s success into a profit.

Another great deal for consumers — but what about investors?
My fellow Fools may say this is another great deal for Amazon. The bigger Prime gets, the stickier it is, and the more consumers will spend shopping on Amazon.com, Inc. (NASDAQ:AMZN). That’s a great thesis if Prime were expensive enough to cover the services it provides, but it isn’t.

Prime began as a “free” two-day shipping offer, and judging by the cost of shipping, that alone may be a money-loser. I’m a regular Prime user, and I order about five items a month. If we figure $10 per item (I’ve ordered golf clubs and vacuums, so $10 is generously low), that’s a shipping cost of $600 per year. On top of that, Amazon is spending millions to bring in streaming content and millions more to develop its own content. I get all of this for $79 per year.

The thesis is that Amazon makes up for the added cost with higher sales and eventually higher margins. But over the past year, Amazon’s gross margin (including shipping) was down 0.2% to 6.8%. Click here for a deep dive I did into Amazon’s margins after the first quarter.

On the streaming side, Amazon.com, Inc. (NASDAQ:AMZN) is playing an arms race against Netflix, Inc. (NASDAQ:NFLX) in a never-ending battle to attract customers. But neither company has proved the ability to make a long-term profit, and content costs are only going up while revenue per customer has remained relatively flat. That’s a recipe for long-term losses for both companies.

The only thesis that makes sense
If you’re an Amazon.com, Inc. (NASDAQ:AMZN) bull, you must think it will grow sales forever and eventually crush all retailers and eventually generate higher margins. The problem is that revenue growth is slowing and margins haven’t picked up a bit. 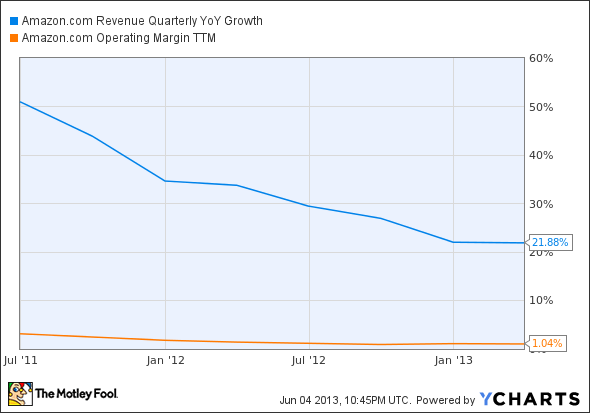 How big does Amazon need to get before we can expect a profit? The company sold $64 billion of products over the past year, so maybe $100 billion is the tipping point — or maybe $200 billion?

Will This Fresh Idea Send Amazon.com, Inc. (AMZN) Into the Stratosphere?