Gun control policies out of Washington D.C and fears of crime rate increases sent consumers into a panicked buying frenzy. The gun consumer asks, “If you can’t feel safe in a school, where can you feel safe?” and “If the government is going to take our right to bear arms, I will buy as many as I can and hide them so that I can feel safe against criminals and government oppressors.”

All of this translated into sales increases of 52%, 39%, and 27%, respectively, for Sturm, Ruger & Company (NYSE:RGR), Smith & Wesson Holding Corporation (NASDAQ:SWHC) and Olin Corporation (NYSE:OLN)’s Winchester unit in the most recent quarter. Over the past year, Ruger, Smith & Wesson, and Olin beat the S&P 500 total return index with a 46%, 37%, and 15% return respectively as of this writing (see chart below). 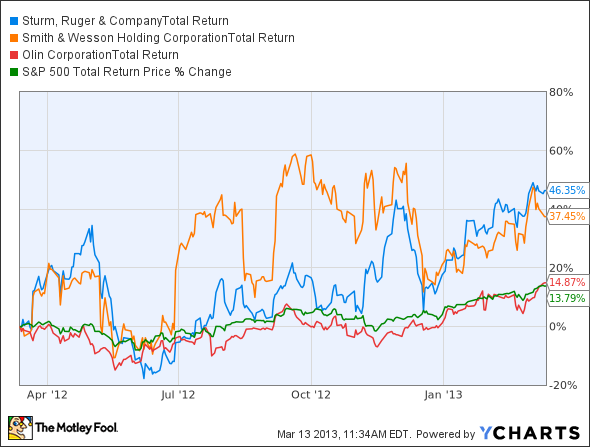 Both Ruger and Smith & Wesson reported low inventory across the supply chain. Fearful gun consumers go into the stores and clear the guns off the shelves. This puts retailers in a bind and they order off the distributors who then pass the buck onto the gun manufacturers who strain capacity to get the guns into the hands of customers.

Sturm, Ruger & Company (NYSE:RGR) estimates its “sales through rate” or sales from distributors to retailers grew 63% in 2012, indicating heavy demand according to its latest earnings call. Ruger uses sales through rate to manage its business since it more accurately depicts the dynamics of the industry.

Surge in gun demand led to uncomfortably low inventories for retailers. This in turn led to retailers ordering more than they need from the distributors and the distributors in turn ordering more than they need from the gun manufacturers. All of this added up to annoyingly high levels of backlog that may never translate into sales. Sturm, Ruger & Company (NYSE:RGR)’s CEO, Michael Fifer, doesn’t even use it as a metric in managing the business and would hardly discuss it on a forward basis during the last earnings call (log in required).