I’ve spent a lot of time recently discussing teen and young adult apparel retailers. In a previous article, I highlighted the weakness of teen apparel retailers Abercrombie & Fitch Co. (NYSE:ANF) and Aeropostale, Inc. (NYSE:ARO), and the comparative strength of more diversified retailers such as The Gap Inc. (NYSE:GPS) and Urban Outfitters.

Today, I would like to focus on three other stocks in the apparel and accessories industry — Guess?, Inc. (NYSE:GES), Express, Inc. (NYSE:EXPR), and Ralph Lauren Corp (NYSE:RL). These three companies all recently rallied after reporting better-than-expected quarterly earnings — a stark, refreshing contrast to the trials and tribulations facing the troubled teen apparel sector.

Shares of apparel retailer Guess?, Inc. (NYSE:GES) recently surged, after the Los Angeles-based company posted better-than-expected first-quarter earnings followed by solid guidance for the rest of the year. The company reported adjusted earnings of $0.14 per share, down from $0.30 in the prior year quarter. Revenue also slid 5.2% year-on-year to $548.9 million. These results topped the consensus estimate for profit, but missed on revenue growth. Nonetheless, the stock soared 8% after it reported earnings on May 30. Was this optimism really justified? 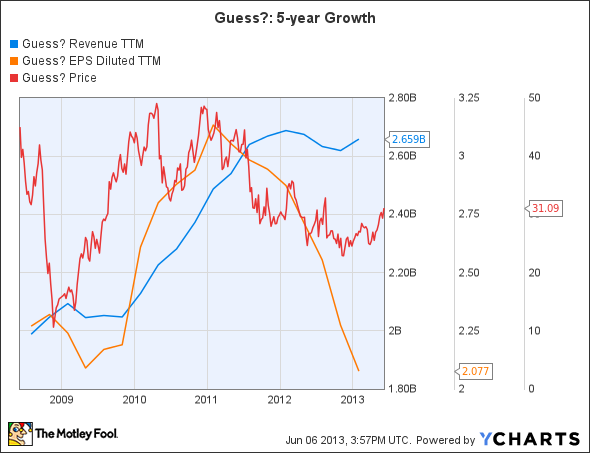 Not really. Although Guess?, Inc. (NYSE:GES) reported impressive 10% year-on-year sales growth in Asia, its smallest market, sales in North America and Europe declined 5% and 13%, respectively. To make matters worse, same-store sales in North America, its largest market, slumped 9.8%. A 30% increase in Latin American sales helped offset some of those losses, but overall, its global sales growth was a mixed bag. Operating margin also fell from 6.8% to 2.5%, which the company attributed to same-store sales declines, higher markdowns in North America, and a weakening wholesale business in Europe.

Last quarter, CEO Paul Marciano outlined a “three–point strategy” to generate more sales growth in 2013 — more denim products, higher visibility of its iconic jeans, and a shortening of the supply chain calendar. These changes are reactive strategies to streamline and speed up its operations, which rotate fashions at a slower rate than competitors such as Forever 21 and H&M.

While streamlining its efforts is a promising strategy, I’m not convinced that Guess?, Inc. (NYSE:GES) is a solid investment. I would like to see more improvement in its North American sales and beefier operating margins before I believe that the company can really turn its business around.

Express, Inc. (NYSE:EXPR), which sells low to mid-priced apparel for young men and women, was once part of Limited Brands, but was sold to private equity firm Golden Gate Capital in 2007. The company was taken public in 2010, and has since risen 23% from its IPO price of $17. While that long-term gain isn’t terribly impressive, Express, Inc. (NYSE:EXPR)’ recently-reported first-quarter earnings attracted a lot of attention, which boosted shares over 10% on May 30. 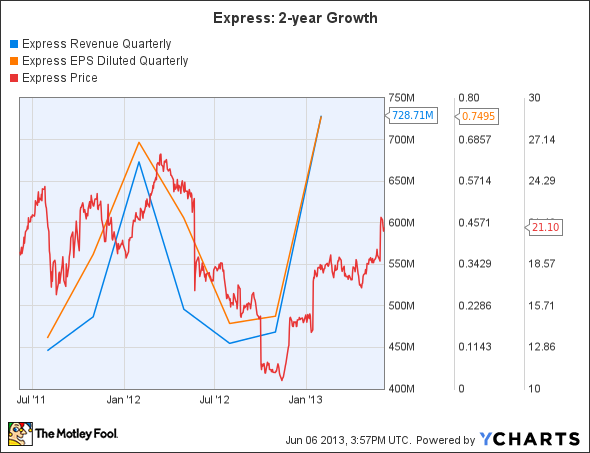 Unlike Guess?, I believe that the optimism for Express, Inc. (NYSE:EXPR) was justified. Earnings per share came in at $0.38, a 23% year-on-year decline which nonetheless topped the consensus estimate by $0.02. Revenue rose 2.5% to $508.5 million, topping analyst expectations of $498 million. Although same-store sales came in flat, it was far better than the negative same-store sales that most analysts had forecast.

Despite its smaller brick-and-mortar footprint of 600 stores (compared to Guess?’ 1,690 global stores), Express managed to grow its e-commerce sales by 48% during the quarter, up from 28% growth in the previous year. E-commerce now accounts for 14% of Express’ top line, generating $70.7 million in sales.

What I like about Express, Inc. (NYSE:EXPR) is its smaller size, its fairly cheap valuation (11.7 times forward earnings), its stable same-store sales growth, and its strong e-commerce growth. In addition, the company only operates in the United States, which insulates it from unfavorable currency impacts and regional slowdowns. 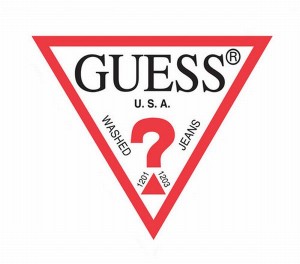 Express, Inc. (EXPR): This Apparel Retailer Could Have a 50% Upside Potential...