Shareholders of GT Advanced Technologies Inc. (NASDAQ:GTAT) probably felt like they were in for more of the same old price action last week — namely, downward. Sure enough, the stock steadily marched lower throughout Monday’s session before finally closing down nearly 3%.

Even so, that paled in comparison to its harrowing plunge over the previous year: 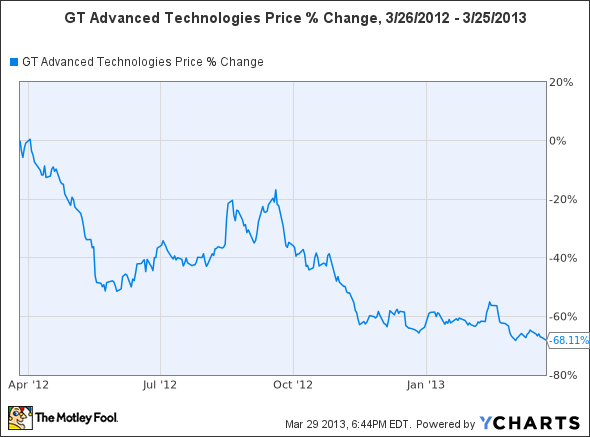 Even better, GTAT jumped another 10% two days later after it announced a memorandum of understanding with Powertec Energy, through which Powertec stated its intention to purchase polysilicon technology and equipment from GTAT in the second half of 2014.

But that begs the question: Was GTAT’s 24% rise over the course of just three trading days justified? After all, it does appear to be the result of positive developments which haven’t even come to fruition yet.

With regard to sapphire, it’s also important to remember Corning Incorporated (NYSE:GLW) has been in business for more than 160 years, so it surely won’t be an easy task for GTAT to break the stranglehold its larger competitor has on the electronics market through its Gorilla Glass.

On the solar side, should investors really be this excited over polysilicon equipment orders which won’t show up for nearly two more years?

Is sapphire a phone’s best friend?
First, as I mentioned just a few weeks ago, more than half of GT Advanced Technologies Inc. (NASDAQ:GTAT)’s current $1.25 billion backlog at the end of 2012 came from its sapphire segment, with two-thirds of it driven by established LED and industrial solutions and the remainder coming from potential low-volume smartphone and camera lens adoption. Additionally, as fellow Fool Evan Niu pointed out last week, Apple Inc. (NASDAQ:AAPL)‘s iPhone 5 already incorporates a sapphire camera lens cover on the back, and rumors continue to circulate that Google Inc. (NASDAQ:GOOG)‘s upcoming Motorola “X Phone” might use sapphire in some capacity.