Years ago the Mexican government decided to privatize a portion of its infrastructure. A collection of privatized airports are publicly traded in the U.S. and they have proved to be quite profitable investments over the past decade. The airline industry has a bad name due its flagship carriers’ continual problems. These Mexican airports are not well-known, but they offer the stability and growth potential that is hard to find in other parts of the airline industry.

Mexico is a land of contrasts, with beautiful beaches and drug-fueled violence. Even in the midst of its challenges, tourists continue to visit, taking advantage of a lower cost of living and a beautiful climate. With former president Felipe Calderón relinquishing power, and the slow consolidation of the cartels, there is hope that cartel violence will taper off.

The majority of violence occurs along the northern and southern borders, along with a few Pacific provinces. In general, the northern reaches are quite violent due to their close proximity to the consumer: the United States. Grupo Centro Norte and Grupo Pacific have more airports along the northern parts. A major increase in violence would have a lesser chance of directly impacting their facilities than Grupo Sureste. 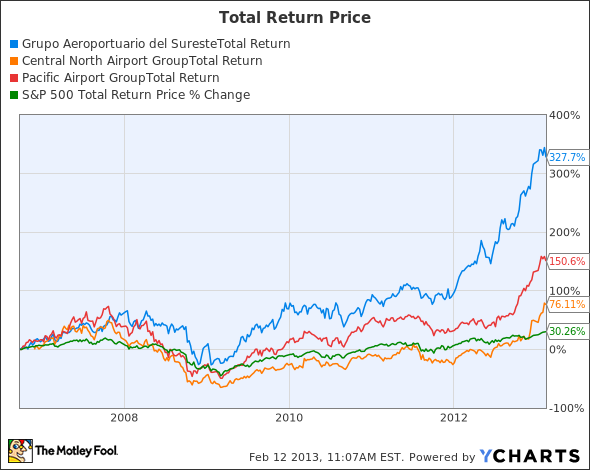 Grupo Aeroportuario del Sureste (ADR) (NYSE:PAC) (NYSE:ASR) operates in Cancun and the Yucatán peninsula. The popularity of Cancun and its status as a major tourist destination makes the airport the most important of Sureste’s facilities. Out of all of the three airport groups, Sureste is the most internationally oriented due to its important role in serving U.S. and Canadian tourists.

Even in the face of the Great Recession and health scares from H1N1 flu, the company has a five-year revenue growth rate of 9.45%. At the same time management has been able to greatly increase earnings with an EPS growth rate of 19.24%. Volumes have increased over the past decades and this drives revenue and earnings growth.

Another positive aspect of the company is that it has a total debt to equity ratio of just .03. Without a major debt load, the company is more agile and not weighted down by constricting bond payments. They are looking to expand their operations in Puerto Rico with the privatization of Luis Munoz Marin International Airport.

Grupo Aeroportuario del Centro Nort(ADR) (NASDAQ:OMAB) operates in the northeast of Mexico, where the majority of traffic is domestic. As of Q4 2012, approximately 87% of traffic was domestic. The company has posted strong growth figures with a five-year EPS growth of 27.05%. Non-aeronautical services play an important role in the company’s earnings, and have increased more than five times from 2001 to 2011. Renting out retail space, parking services, advertising space, and car rentals are all significant revenue boosting products.

Grupo del Centro Norte’s ability to find creative sources of revenue growth is impressive. Even in the midst of sustained growth the company has not saddled itself with large amounts of debt. It has a total debt-to-equity ratio of 0.26. The large amount of drug-related violence in the north, and Grupo del Centro Norte’s presence in such areas, is concerning. On a valuation basis, the company is the most expensive of the three firms with a P/E ratio of 31.40. Until the price comes down or violence levels stabilize, it may be best to hold off on this firm.

Grupo Aeroportuario del Pacifico (ADR) (NYSE:PAC) operates in the western side of Mexico. Guadalajara is its major airport with 35% of passenger traffic in 2012. The city is a major commercial hub in Central Mexico. Overall, the company is more diversified than Grupo del Centro Norte with 66% of passengers being domestic.