In March 2012, Starbucks Corporation (NASDAQ:SBUX) announced that it was jumping into the lucrative and explosively growing single-cup coffee machine business with its new product, the Verismo, allowing coffee drinkers to brew regular coffee, lattes, and espressos at home. This news from the coffee giant was seen as a direct and devastating threat to Green Mountain Coffee Roaster Inc. (NASDAQ:GMCR)’s single-cup beverage system, the Keurig, causing Green Mountain Coffee Roaster Inc. (NASDAQ:GMCR)’s stock to plummet.

Fast forwarding to the present, Green Mountain is healthy and has been on a bullish run.  Green Mountain’s stock closed at $59.48 before the May 8 earnings call, while the stock is up over 65% in 2013, squeezing short sellers along the way. 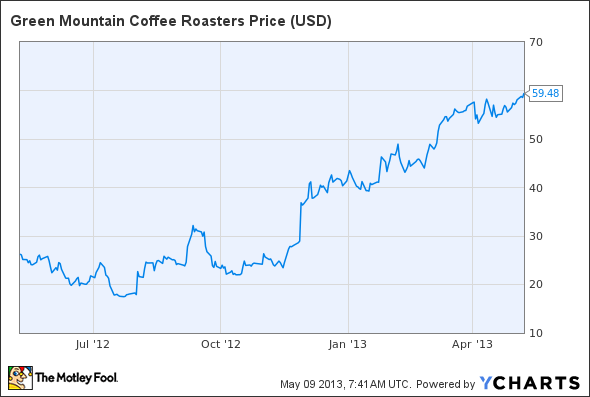 As it turns out, consumers are still buying the Keurig machines even with the existence of the Verismo. The single-cup market was big enough to absorb the Verismo, while not undercutting sales of the Keurig. Additionally, Green Mountain K-cups unit sales and revenue are still growing, unfazed by the new competition after the patents expired.

Green Mountain announced that its second quarter earnings per share is $0.93, crushing analysts consensus estimates of $0.74 per share, and more importantly, raised its full-year earnings outlook for the second time in 2013. The stock was halted after the close to announce some significant news. Green Mountain will be partnering with competitor Starbucks Corporation (NASDAQ:SBUX) to extend and expand their frienemity (friendship plus enmity) to a new five year agreement to triple the number of Starbucks Corporation (NASDAQ:SBUX)-branded varietals and blends on Green Mountain’s Keurig beverage system. Green Mountain’s stock catapulted over 16% in after hours trading.