In a matter of days, Google Inc (NASDAQ:GOOG) kicks off its I/O developer conference. Everyone is expecting the company to take the wraps off of a second-generation Nexus 7 tablet to follow up the success of the first model that was unveiled at last year’s I/O conference.

There have been numerous supply chain leaks, suggesting that the search giant is ditching NVIDIA Corporation (NASDAQ:NVDA) in favor of QUALCOMM, Inc. (NASDAQ:QCOM) for the applications processor, while beefing up the display resolution and shedding some bulk and weight.

But in an exclusive interview with Wired ahead of I/O, recently christened Android chief Sundar Pichai potentially downplayed the possibility of a new Nexus 7 by saying, “It’s not a time when we have much in the way of launches of new products or a new operating system.” That could be disappointing for anyone banking on a second-generation Nexus 7.

However, it’s likely Pichai is just being coy. Last year’s I/O saw both the Nexus 7 and misguided Nexus Q on the hardware front. 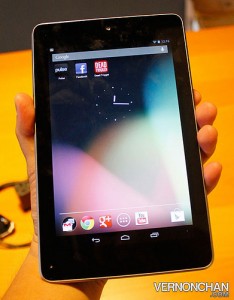 Google Inc (NASDAQ:GOOG) wisely pulled the plug on the Nexus Q before it even shipped, while the Nexus 7 promptly took off in popularity. Pichai is probably just hinting that new product launches won’t be the feature presentation. The exec shifted focus to developers of both Android and Chrome, saying the company will outline how it can provide more tools to this important group of stakeholders.

Previously the head of Chrome, Pichai took over Android when Andy Rubin stepped down earlier this year. Now both of Google Inc (NASDAQ:GOOG)’s operating systems fall under his jurisdiction, and Pichai also discredited the idea of Android and Chrome merging.

When asked about how Facebook Inc (NASDAQ:FB) Home or Amazon.com, Inc. (NASDAQ:AMZN)‘s Kindle Fire could undermine Android, Pichai reiterates that Google’s philosophy has always been to embrace a fully open philosophy. That’s why Google Inc (NASDAQ:GOOG) would never actively try to stop companies from pursuing these types of strategies, especially if the end result is that users have more choice.

There are signs that Home is crumbling, but it’s just the beginning of a new mobile strategy for the social network. A second-generation Nexus 7 would inevitably be tasked with competing with a third-generation Kindle Fire, which Amazon.com, Inc. (NASDAQ:AMZN) will probably release later this year. Still, Home and Kindle Fire aren’t the types of things that Google Inc (NASDAQ:GOOG) focuses on, according to Pichai.

Even if Pichai downplayed it, I’m still expecting a second-generation Nexus 7 this week.

The article Did Google Just Shoot Down Its Next Nexus? originally appeared on Fool.com and is written by Evan Niu, CFA.