Google Inc (GOOG): The BRICS and the Bathwater

Has the sun set on Brazil, Russia, India, China and South Africa (BRICS)? With the end of China’s commodity boom many people are calling for the end of the BRICS. China’s aging population and the government’s push to make the economy more consumption oriented means less demand for raw materials. Still, investors have to be careful not to throw out the baby with the bathwater.

All Is Not Lost

While making a bet on high growth in the BRICS is a questionable idea, there are still strong investment opportunities to be found. Brazil is a good example. The nation’s GDP growth rate is falling, and the country was recently rocked by massive protests over price increases. But, over the past decade the country has seen its GINI coefficient fall significantly. A falling GINI index means more money flowing to the middle and lower classes. 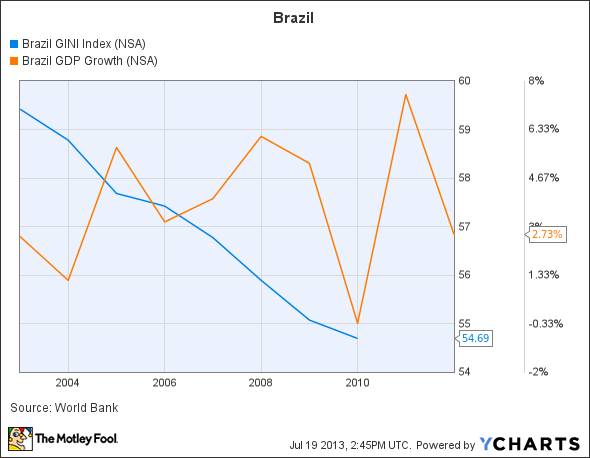 Look at the Middle Class

Good investments can be made by looking selling to the middle class. In China alone the middle class is expected to grow to 700 million, a little more than double the current middle class population. While the first BRICS boom was based on raw materials, the second stage will be more consumption oriented.

Google Inc (NASDAQ:GOOG) was birthed in America, but it is a good emerging market play. Its Android operating system is open source and provides a great computing platform for price conscious consumers. Android is one of the prime operating systems for tablets and smartphones, cheaper alternatives for a laptop. Tablet sales are expected to surpass PC sales this year, and Google has a strong medium to promote its profitable ad network and search engine.

Between Google.com, YouTube, AdSense and other products, Google Inc (NASDAQ:GOOG) is able to make a profit margin of 20.9%, an earnings before interest and taxes (EBIT) margin of 25.3% and a return on investment (ROI) of 14.3%. It is a little pricey with a price to earnings (P/E) ratio around 27, but the company is very profitable and has a strong growth profile.

Another interesting company to watch is ARM Holdings plc (ADR) (NASDAQ:ARMH). ARM Holdings makes energy efficient processors that have proven to be very popular with mobile devices. Even Microsoft released a Windows OS that is ARM specific.

Smartphones and tablets allow consumers to check their email, shop online, read the news, play games and update their social networks. Traditional laptops suffer from reduced battery life and higher costs. With developing electricity grids and massive blackouts, strong battery life is an important pain point that ARM Holdings plc (ADR) (NASDAQ:ARMH) effectively addresses. With a total debt to equity ratio of 0.00, a profit margin of 28.4% and a ROI of 13.7%, ARM Holdings is financially a strong company.

Right now ARM Holdings plc (ADR) (NASDAQ:ARMH) is too expensive. Its P/E ratio is around 70 and market competition is about to heat up. Intel Corporation (NASDAQ:INTC) is looking to improve its mobile offerings and this will put pressure on other players.

Yum! Brands, Inc. (NYSE:YUM) is the Wal-Mart Stores, Inc. (NYSE:WMT) of the fast food world. The company owns KFC, Pizza Hut and Taco Bell. Yum!’s 6,000 Chinese stores recently took a hit when excessive levels of antibiotics were found in some of the KFC’s chicken. Sales and income took a steep fall, but already the company is coming back. Everyone needs to eat, and Yum! Brands has found the sweet spot with the emerging market middle class. Its food is a status symbol, but it is not prohibitively expensive.