NVIDIA Corporation (NASDAQ:NVDA) shareholders have had their patience tested as the company has missed the recent stock market rally. In the last six months, NVIDIA stock has for the most part stayed between $12 and $13, underperforming the S&P 500 by more than 10%. 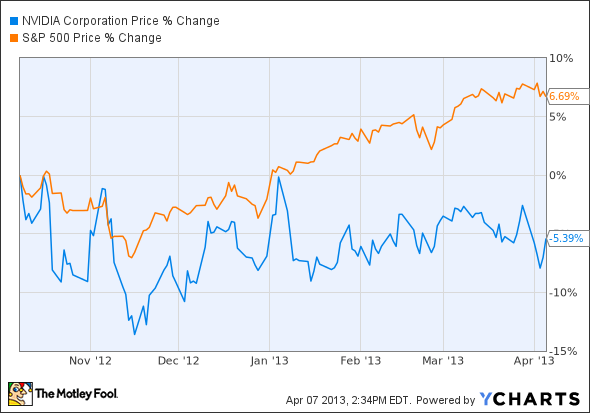 Nevertheless, from a long-term investing perspective, NVIDIA looks like an attractive opportunity. At the end of its most recent fiscal year, the company had over $3.7 billion in cash and investments on its balance sheet. This works out to approximately $6 per share, or nearly half of its market cap. This large cash stockpile provides a good safety net for investors. Meanwhile, the company introduced two promising new products earlier this year — GeForce GRID and Tegra 4i — which should begin to ramp up later this year. Based on these factors, NVIDIA stock seems significantly undervalued at Friday’s closing price of $12.46.

New products on the way
Heavy investments in the development of new products led to a drop in NVIDIA’s EPS last year, and analysts currently expect another drop this year. The decline of the traditional PC industry, combined with the advance of integrated graphics solutions from Intel Corporation (NASDAQ:INTC) and Advanced Micro Devices, Inc. (NYSE:AMD), is reducing the addressable market for NVIDIA’s legacy GPU business. Clearly, this business will not provide the growth necessary to reverse NVIDIA’s fortunes. However, I think Mr. Market is underestimating the company’s long-term growth opportunities, which could eventually drive NVIDIA Corporation (NASDAQ:NVDA)’s stock price much higher.

The “problem” is that many of these growth opportunities will not be fully realized until next year. That’s why I previously called 2013 “a year of waiting” for NVIDIA shareholders. However, for a long-term investor, that’s not actually a problem; it’s an opportunity! For example, GRID will be NVIDIA’s first foray into the “cloud” and consists of professional-quality GPUs built into a server. Different variants of GRID will accelerate virtual desktops (NVIDIA is partnering with major software vendors like Citrix Systems, Inc. (NASDAQ:CTXS), VMWare, Inc. (NYSE:VMW), and Microsoft Corporation (NASDAQ:MSFT) for this purpose), replace individual workstations for small and medium-sized businesses, and run graphics for Internet-based gaming services. However, the workstation replacement and gaming versions of GRID will not be ramping up until mid-late 2013.