I remain a fan of Microsoft Corporation (NASDAQ:MSFT), especially in the internet space. Microsoft will continue to grow its’ advertising empire going forward. This is driven by the fact that Apple iOS 7 will be using Bing for Siri on iOS 7.

Let’s be clear though, Microsoft has been scratching Apple’s back lately. Just look at Microsoft Corporation (NASDAQ:MSFT)’s launch of Office 365 onto the Apple ecosystem. Microsoft and Apple have been more active with strategic partnership lately, in order to dethrone Google Inc (NASDAQ:GOOG) from being the king in mobile. 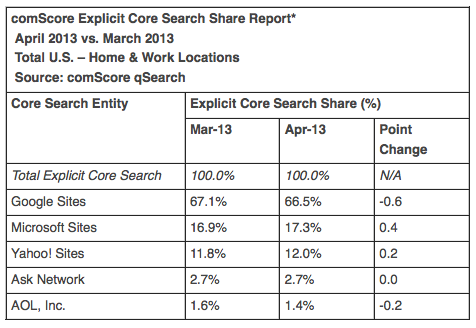 Google has seen its market share consistently decline against Microsoft Corporation (NASDAQ:MSFT) and Yahoo! Inc. (NASDAQ:YHOO). This isn’t very surprising when considering the sheer amount of growth the company has experienced in its search business internationally. The comScore results only measure the United States. The data basically indicates that while Google Inc (NASDAQ:GOOG) secures an advantage initially, it eventually loses out that advantage to competitors over time. This could be a great leading indicator for the Microsoft and Apple duo in mobile.

I believe that Google will maintain a healthy amount of market share in both search and mobile. Microsoft Corporation (NASDAQ:MSFT) will be stealing some of Google Inc (NASDAQ:GOOG)’s thunder. Google will be okay, though, because it makes up for this lost market share in the United States with exponential growth in emerging markets.

1.4 billion people will be entering the middle class over the next ten-years, and 98% of that will be in the emerging markets (according to The Procter & Gamble Company (NYSE:PG)). Microsoft’s Bing will grow in the United States, but Google will win the world. In the end, both companies are likely to grow.

Google Inc (NASDAQ:GOOG) is the most compelling investment, with Bing and Yahoo! biting at the heels of Google. In the end, these three web properties are likely to grow but at un-even rates. Google will grow the fastest, with Bing in second, and Yahoo! Inc. (NASDAQ:YHOO) in third.

However, the up-side to Yahoo! is its’ acquisitions, and cost-cutting. Bing may grow at slower rates, but then again, Microsoft Corporation (NASDAQ:MSFT) has other opportunities that are going to be lucrative like Office 365.

The article Google Is Losing Ground to Yahoo! and Bing originally appeared on Fool.com.