It seems that everyday Google Inc (NASDAQ:GOOG) is compared to Apple Inc. (NASDAQ:AAPL) and the talk is that the stock is going to crater. The euphoria over the race to $1,000 is on every Google investor’s mind, as well as every Apple investor’s mind, too. This elusive $1,000 target was once reserved for Apple, and now Google is by far the closest, trading over $870. 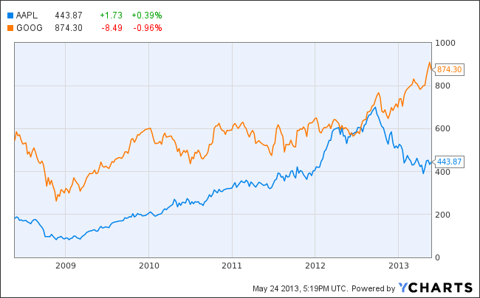 But the real fear is that Google’s stock might mirror the free fall Apple has seen. However, the case can be made that Apple was bound to fall; Google is not Apple and Google can reach $1,000.

It was a classic case of buy the rumor, sell the news. Not that the iPhone 5 was a disappointment, but that there was no new product to follow the iPhone 5. To be a truly compelling growth story, a company needs to be able to continue telling the story to Wall Street. Apple and its CEO Tim Cook failed to realize and understand this.

At this year’s All Things D tech conference, Apple Inc. (NASDAQ:AAPL) CEO Tim Cook tried to encourage investors and Apple fans that the company has “several more game changers” ahead. If there is one encouraging fact for Apple investors, it would be Cook’s notion that for the last 15 years, the company has done the same thing, “release products when they’re ready and believe very much in the elements of surprise.”

It seems, per the rumors, Apple Inc. (NASDAQ:AAPL) has been working on an Apple TV for a number of years and Cook maintained the status quo, not giving away any specifics, saying at All Things D:  “I don’t want to go any further on this. I don’t want to give anyone else the idea….there is a very grand vision.”

Google Inc (NASDAQ:GOOG), however, has still managed to do a much better job of crawling into the lives of its users. Its products are stickier and so Google was never a one-trick pony. The company’s founders Larry Page and Sergey Brin developed the company’s core profit center with its search algorithm. From there, the company has constantly branched out into other areas for revenue and profits.

Google has many different revenue streams

Google Inc (NASDAQ:GOOG) has continued to innovate and tie its products together to create revenue. Consider that:

One of the most interesting items from Hewlett-Packard Company (NYSE:HPQ)‘s earnings beat is HP’s embrace of Google Inc (NASDAQ:GOOG) devices. HP CEO Meg Whitman hardly mentioned Microsoft Windows during the call, but instead chose to talk about Google every chance she got. HP just launched the $339 Pavilion 14 Chromebook and the $169 Slate 7 Android tablet. Meg Whitman specifically said:

Listen, if we have the right product priced right, the channel still loves HP, and they want to sell in our
products whether it’s to small businesses, medium-sized business or the enterprise. And, frankly, having
Android products helps a lot. This $169 Slate helps covers a segment of the market we didn’t have
before.

Hewlett-Packard Company (NYSE:HPQ)’s embrace of Google Inc (NASDAQ:GOOG) devices is beneficial to both companies. HP still is beloved in Silicon Valley and the company garners a lot of respect. By HP shifting away from Microsoft and Windows, look for other companies to follow HP’s lead.