Mister Market’s pretty happy that Steve Ballmer is soon to be out the door. But truthfully, he hasn’t been as bad of a CEO as Microsoft Corporation (NASDAQ:MSFT) investors and analysts want to think. It may seem that nothing good has come from Ballmer’s time as Chief, that’s not a fair assessment. However, it looks like it’s time to sell. Let’s talk about why you might want to do the same.

Ballmer was given an impossible task: Take the reins of the most powerful tech company in the world from the man that started the company, very close to the peak of the market’s insanity in January 2000, and return value to shareholders for the next decade or two. Well, that didn’t happen: 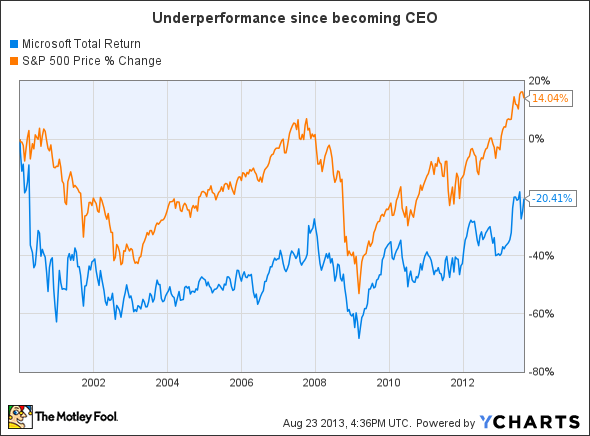 Despite poor returns from the market peak of 2000, Microsoft Corporation (NASDAQ:MSFT) is larger and more profitable than it was when Ballmer took over: 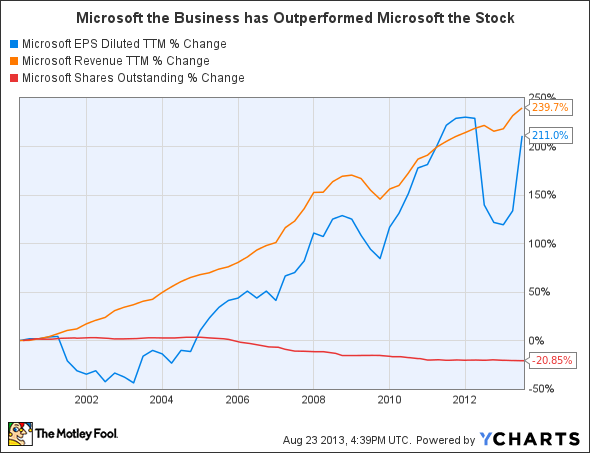 EPS and revenue have grown significantly over the past 13+ years. Share buybacks have reduced shares outstanding by more than 20%. Under Ballmer’s leadership, Microsoft Corporation (NASDAQ:MSFT) has invested heavily in the Entertainment segment, and with the Xbox One this will continue to to be a bright spot. So will the Data Center business, on increasing utilization of the cloud.

Yes,Windows is losing relevance, and Microsoft Corporation (NASDAQ:MSFT) has done horribly at mobile. But Ballmer is leaving a bigger and stronger Microsoft than the one he took over.

Bigger and stronger; but much more vulnerable.

Competition and consumer sentiment are eroding Microsoft Corporation (NASDAQ:MSFT)’s relevance. If one looks to competitor Google Inc (NASDAQ:GOOG), for example, we see a company which is leveraging the value of its leaders. From the 2012 annual report: :

If we were to lose the services of Larry, Sergey, Eric, or other key personnel, we may not be able to execute our business strategy. Our future success depends in a large part upon the continued service of key members of our senior management team. In particular, Larry Page and Sergey Brin are critical to the overall management of Google and the development of our technology … they also play a key role in maintaining our culture and setting our strategic direction.

Think about this statement in comparison to what’s happening with Microsoft Corporation (NASDAQ:MSFT) shares. When a company’s stock price goes up on the announcement of a leader’s retirement, one could draw a line to a systemic problem with the company’s culture and strategy. And I think that’s the real problem with Microsoft.

So it’s good that Ballmer’s leaving?

Maybe. Maybe not. As the saying goes, “better the devil you know.” But Microsoft’s problems are about more than just leadership. This is a different world than 2000.