Don’t you wish more companies would dream big? I don’t mean “big” as in, let’s make some more money next year, or adding a new feature to your flagship product. I’m talking BIG, like changing the world for the better. You know, the way Google Inc. (NASDAQ:GOOG) dreams.

Big G just took steps to make sure that the crazy dreams keep coming. CEO Larry Page just reassigned two of his top dreamers to the division that’s supposed to think up bigger, crazier, and more disruptive ideas without worrying too much about the business side of it all.

I thought Rubin was basically fired?
At first glance, these moves might look like demotions. Andy Rubin was part of the Danger/Sidekick team that arguably invented the first proto-smartphone, and his Android platform is now the biggest mobile computing beast in the world. He’s been replaced by the more even-keeled Sundar Pichai, who already oversees the Google Chrome web browser, Chrome OS, and the Google Drive storage product.

This frees Rubin up to “start a new chapter at Google,” in Page’s words. And what might that new chapter look like? “Andy, more moonshots please!” 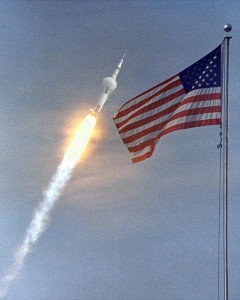 Google Inc. (NASDAQ:GOOG) defines a moonshot this way: “Moonshots live in the gray area between audacious technology and pure science fiction. Instead of a mere 10% gain, a moonshot aims for a 10x improvement over what currently exists. The combination of a huge problem, a radical solution to that problem, and the breakthrough technology that just might make that solution possible, is the essence of a moonshot.”

Keep that far-reaching goal and the CEO’s gleeful order in mind as you read on.

That’s the first big innovation booster Page launched this week. The second came when mapping and commerce services leader Jeff Huber was told to report for work at Google X Lab, according to a Wall Street Journal report. Huber was champing at the bit “to work in more of a start-up-like environment,” a Google spokeswoman confirmed to the Journal.

On the organizational level, these changes simplify Google Inc. (NASDAQ:GOOG) from seven core product groups to five, which is a good idea in itself. Fewer divisions means more operational unity, and managers should be able to direct resources more efficiently in a simpler structure.

But that’s not really the goal here. Like I said, it’s all about driving more innovation and more insane moonshot projects.

What is this wacky lab all about?
Huber will definitely land at the X Lab and if the facility is a refrigerator, you can think of Rubin as a giant magnet. They just belong together.

Microsoft Mail Services: What was the Deal with the Microsoft Hotmail, Outlook...2 Smart Buys In The Smartphone Arena You Can’t Pass Up: Research In Motion...
Monthly Newsletter Strategy
Download a free copy of our newsletter and see the details inside!
Hedge Fund Resource Center
Billionaire Hedge Funds