After a multiyear run that has made countless investors significant returns, gold has fallen out of favor with investors both large and small. Recently, Goldman Sachs Group, Inc. (NYSE:GS) recommended shorting gold stating that it could drop even faster than they expect if certain conditions line up against the yellow metal. While the global economy remains on questionable ground, even these negatives seem to be insufficient to drive gold prices higher.

You must now begin to wonder not what the next positive catalyst will be, but if gold falls below $1,500, which looks probable, a dip below $1,400 is likely to follow.

Technically speaking
While Fools don’t follow technical analysis, neither do we ignore clear and convincing evidence that can have a real impact on our investments. The commodity has solid support around $1,500, but not much below that for quite a while. Commodities are notorious for following technical patterns because so many traders look at these factors. This is not reason alone to short gold, but it’s definitely worth noting. 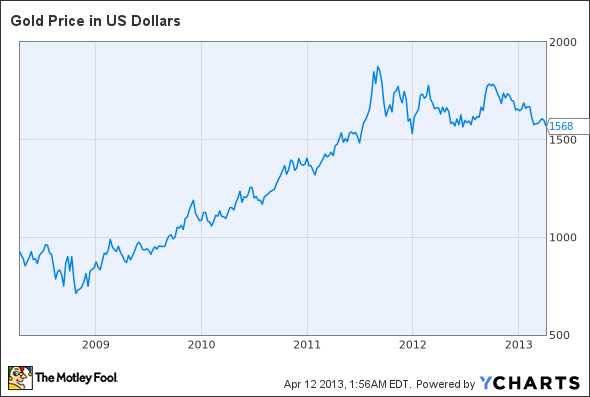 Gold Price in US Dollars data by YCharts.

Goldman’s view
A significant basis for Goldman’s negative view on gold is the muted reaction the commodity has had to global macroeconomic events: “With our economists expecting few ramifications from Cyprus and that the recent U.S. slowdown will not derail the faster recovery they forecast in 2H13, we believe a sharp rebound in gold prices is unlikely,” Goldman Sachs Group, Inc. (NYSE:GS) said. While I think this outlook view oversimplifies the forces acting on gold, it’s not without merit. While the events in Cyprus represent evidence of economic uncertainty — which is typically bullish for gold — it also led to a strong U.S. dollar, which is bearish. It should not be surprising that these forces cancelled each other out initially, but the lingering weakness in gold is not promising.

Continuing weakness
Perhaps one of the most troubling realities for gold is that inflation continues to remain in check despite the Federal Reserve’s slavish devotion to quantitative easing. Many large and small investors piled into gold, specifically into ETFs such as the SPDR Gold Trust (ETF) (NYSEARCA:GLD). As these investors see their positions dwindling and stops are hit, this may accelerate selling and drive gold even lower. That’s one of the catalysts Goldman Sachs Group, Inc. (NYSE:GS) points to as a potential driver of gold prices below its target of $1,450. If money flows from GLD become increasingly negative, that has the potential to put significant downward pressure on gold.

We may use your email to send marketing emails about our services. Click here to read our privacy policy.
Related Insider Monkey Articles
Goldman Sachs Group, Inc. (GS): The Bank Seeks to Start Growing Again