For the second time this year, Goldman Sachs Group, Inc. (NYSE:GS) slashed its forecasts for gold prices for both 2013 and 2014, adding to the pressure on gold prices lately. So far, 2013 has seen the Dow Jones Industrial Average 2 Minute (INDEXDJX:.DJI) up nearly 11%, the  S&P 500 (INDEXSP:.INX) up nearly 9%, and gold prices down more than 5%. Even with the global and U.S. economies continuing to show signs of weakness, gold prices have moved very little since late 2011. Given the negative view that Goldman Sachs Group, Inc. (NYSE:GS) is taking of gold, the bank now suggests shorting the commodity. While I don’t see things for gold as being quite that weak, significantly reducing your exposure to gold seems prudent. 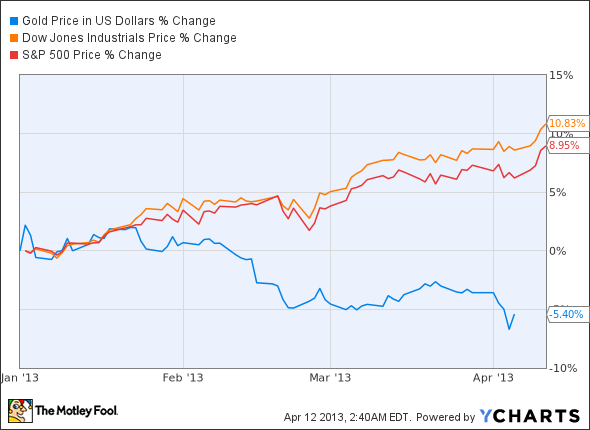 Goldman’s case against gold
In the current round of price reductions, Goldman Sachs Group, Inc. (NYSE:GS) lowered its average price per ounce outlook for 2013 from $1,610 to $1,545. The investment bank now sees the price contracting to $1,350 in 2014, which is a significant reduction from the $1,490 price target it once held. For the rest of the year, Goldman sees plenty of negative pressure: “While there are risks for modest near-term upside to gold prices should U.S. growth continue to slow down, we see risks to current prices as increasingly skewed to the downside as we move through 2013. In fact, should our expectation for lower gold prices continue to prove correct, the fall in prices could end up being faster and larger than our forecast.”

One of the potential catalysts for the above-mentioned increased decline is an accelerating deterioration in investor confidence. A great number of gold investors piled into the commodity on a speculative basis to not miss the expected move. As prices continue to stagnate and fall, investor capital is likely to look for greener pastures more and more quickly. As speculative positions are unwound and more stop-losses at triggered, the move lower could be sharp.