After plunging first through $1,500 per ounce and then $1,400 per ounce, gold seems to have not only reversed, but begun to trend higher, rising seven of the eight trading days since the two-day slide. Helping the rise in prices has been increased demand for physical gold by both individuals and central banks. Further aiding the recovery is that many of the short-term forces that were weighing on gold prices have either been resolved or removed. Still, you must wonder if gold prices are getting an extended dead-cat bounce before falling lower, or if a new trend is being established. 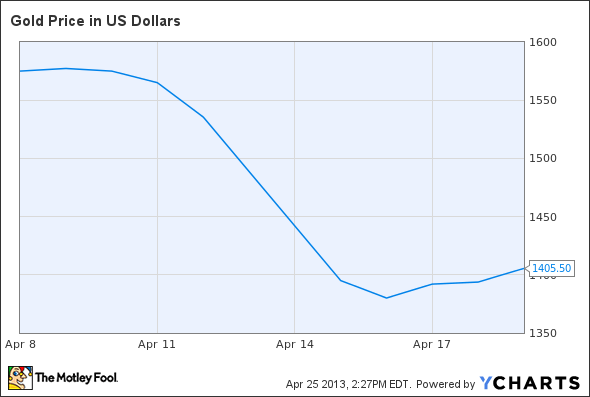 Look out below
After falling through a critical support level at $1,500, gold wasted no time dropping all the way through the next century mark at $1,400. So severe was the fall that Goldman Sachs Group, Inc. (NYSE:GS) quickly advised its customers to avoid the precious metal, pointing out that cash outflows were likely to take the commodity lower. With the investment bank’s price target for gold at $1,545 for 2013, however, current prices make the metal look cheap, at least as a near-term proposition. That said, it has set its 2014 price target at $1,350, so the longer-term outlook is not great.

The impact of the Cyprus crisis shouldn’t be overlooked, either. As a part of the bailout, Cyprus had to liquidate its gold positions to raise cash. This isn’t expected to have a lasting effect, but it probably added to the downward pressure. Even Goldman’s negative view on gold discounts the short-lived impact of these events: “With our economists expecting few ramifications from Cyprus and that the recent U.S. slowdown will not derail the faster recovery they forecast in 2H13, we believe a sharp rebound in gold prices is unlikely.”

One of the effects of Cyprus and other global macroeconomic events is that the U.S. dollar strengthened. This has been a drag on gold as safe-haven capital is enticed out of the precious metal and into dollar-denominated options. All of these factors pushed down prices, but only temporarily.

Trending does not make a trend
Just because gold has come off its recent lows, that alone doesn’t mean a new trend has started. Factors that should be considered, however, include the fact that despite the highest level of capital outflows from the SPDR Gold Trust (ETF) (NYSEMKT:GLD) ever, the ETF has also recovered since the slide. There also seems to have been a structural shift going on in the past week, potentially driven by the increased demand for physical gold. Central banks have been buying bullion, and individuals have bought sufficient quantities that the U.S. Mint has temporarily halted sales of one-tenth-ounce coins.

Newmont Mining Corp (NEM): Can It Survive A Gold Crash?