Just one year ago, Glu Mobile Inc. (NASDAQ:GLUU) looked like a good bet to benefit from the growth of mobile gaming. The company’s games were doing well, it was making impressive acquisitions, and the pipeline looked strong. It had even entered into a revenue-sharing partnership with a U.K.-based mobile gambling company to explore new growth areas . 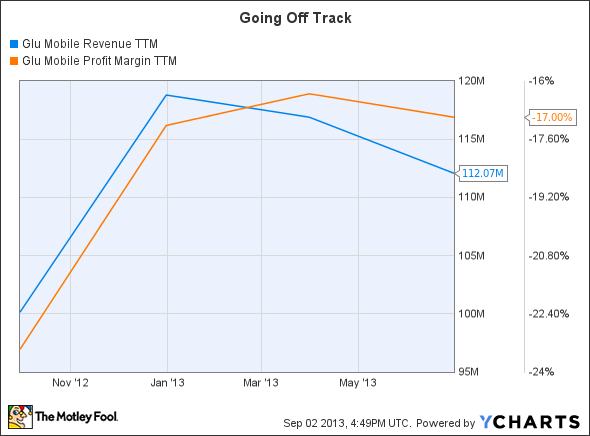 Surprisingly, the company decided that its games needed a “strategic review” in the holiday period last year — a time when its revenue usually spikes on the back of new games — and this proved to be a huge misstep . Revenue has been on a decline ever since and Glu Mobile Inc. (NASDAQ:GLUU)’s second-quarter results and guidance released last month weren’t inspiring either .

Instead, the company went for an accounting tweak that would make its revenue look fatter but the bigger question is, can Glu finally make good games? From what management stated over their recent conference call, Glu is indeed getting ready to launch a few games.

Getting its act together?

Glu is looking to right the wrong it committed last time by targeting the September-December period to launch games, so that they can get off to a good start. But investors should take management’s promises with a pinch of salt as it failed to deliver last year, even though what’s being promised looks impressive.

Glu Mobile Inc. (NASDAQ:GLUU) will be launching the next iteration of its Deer Hunter franchise, which was its most successful game in 2012, in October. In addition, Eternity Warriors 3, Frontline Commando 2, and Motocross Meltdown are slated for release by the end of the year. In addition, Glu is looking to improve the lifetime value of these games and is employing ways to increase monetization opportunities .

It is focusing on Games as a Service (GaaS) model with its GluOn platform to drive revenue in the long run. These latest strategies seem to be working and Glu expects top line growth to return in the fourth quarter of the fiscal year — the holiday quarter .

Games such as Frontline Commando: D-Day and Eternity Warriors 2 are doing well, as paying users for the former grew 25% in the previous quarter while the latter saw revenue growth of 60% . These signs are indeed positive, but Glu Mobile Inc. (NASDAQ:GLUU) has burnt investors over the past year. As such, it would be prudent to see its turnaround plans first materialize and then buy shares.