While looking for bargains in the small-cap sector, I look for companies that are growing earnings at a high rate. Additionally, fluctuations in share price often can provide opportunities to get in at a great price when a company is trading at oversold levels. I found three companies that have both of these qualities.

How to find these stocks

The screen had the following criteria:

The candidates this screen produced include Given Imaging Ltd. (NASDAQ:GIVN), Nam Tai Electronics, Inc. (NYSE:NTE), and Orthofix International NV (NASDAQ:OFIX). The following is a chart of the companies’ share-price performance over the past year compared against that of the S&P 500. 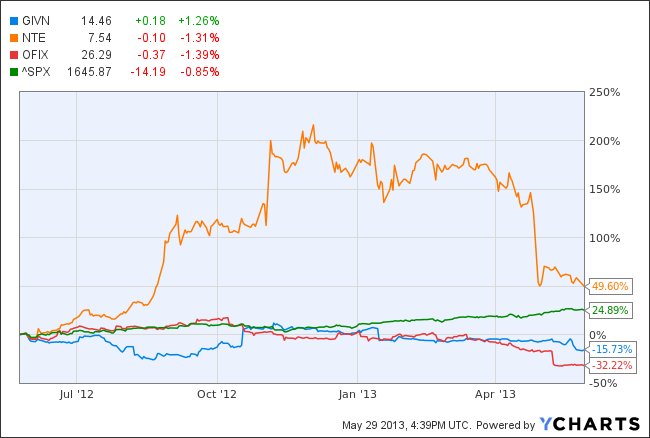 Overall, the performance of these stocks has lagged the S&P 500 over the past year. The remainder of this article will analyze whether or not that can change over the next year and over the long term.

Given Imaging develops, manufactures, and markets diagnostic products for the visualization and detection of gastrointestinal-tract disorders.

Given Imaging Ltd. (NASDAQ:GIVN) is currently trading at $14.48 per share as of the writing of this article, which is toward the lower end of its 52 week range.

The company is expected by analysts to earn 0.57 per share this year, up from 0.52 per share last year. Next year, earnings are expected to jump to 0.82 per share, which would represent an impressive 43.9% one-year growth rate. Over the next five years, analysts expect its annual growth rate to be 25%. This company definitely has expectations and can become a big winner if it can fulfill them.

Some strengths found in the recent quarter include the following items:  Research and development expenses, as well as general and administrative expenses both decreased in the quarter ending in March of 2013 compared to the quarter ending in March of 2012; PillCam and functional GI diagnostics products revenue in the Europe-Middle East-Africa and Asia-Pacific regions both increased significantly, by 8% and 20%, respectively.

Areas of concern start with the fact that the company reported EPS of (.00) per share for the quarter ending in March of 2013 compared to analyst estimates calling for .13 per share in earnings. PillCam and functional GI diagnostics products revenue in the Americas fell by 11%, which represented a $3 million decline in revenue in the three months ended in March of 2013 compared to the same period in 2012. Sales and marketing expenses rose by about $1 million as well, and this contributed to the $400 million swing from $200 million in profit for the first quarter of 2012 compared to the $221 million loss in the first quarter of 2013.

In order for the company to flourish, it must reverse this decline in sales in the Americas region. Furthermore, keeping expenses proportional to what they should be based on profitable quarters is key to growing profits.

Next year, its earnings are expected to grow by 77.4% to .55 per share, which would be up from the .31 per share expected for this year.  Over the next five years, analysts project that its EPS growth per year will be 12.5%. Its shares recently were slammed when, despite beating analyst estimates for its earnings, it issued weak guidance going forward due to concerns that it may lose orders from some of its key customers.

Overcoming this obstacle obviously is a huge factor into whether or not the company can meet its growth targets. Some good news came when it was announced that the company was awarded a 15 million-unit order for LCDs for smartphones on May 10 from an existing customer. In the company’s guidance, it noted that it was forced to lower unit prices in order to meet customers’ requirements. Reversing this trend is another key to maintaining and growing its sales.

Orthofix International NV (NASDAQ:OFIX) is currently trading near its 52-week low of $25.30 per share. Its earnings per share are expected to fall this year to $1.57, which is down from $3.04 per share last year. Next year, it is expected to earn $2.14 per share, which would represent a 36.3% increase. Over the next five years, analysts peg its growth rate at 12.5% per year.

Its earnings for the quarter ending in March of 2013 came in at 0.23 per share, which was well below the consensus estimate of 0.66 per share.   Insiders have been adding shares recently, which would provide an indication that it may be a short-term event. The company also authorized a $50 million share repurchase program in its most recent earnings announcement, which represents about 10% of its current market cap.

In its recent earnings report, year-over-year sales for the first quarter of 2013 decreased by 14%. Brad Mason, the company’s CEO and president, noted in this report that the earnings miss contains issues that are “fixable.” The company still generated $9 million in free cash flow and has strong cash on its balance sheet, which enabled the share repurchase initiative. Sales in its spine and orthopedic units declined year over year in every category, and turning this around is key to recapturing its growing earnings. The company still appears to be in a strong financial position, however.