Earnings season is in its final stages with most of the large companies already done with reporting their quarterly results. Auto stocks reported a strong quarter on the basis of strong U.S. auto sales. However, the recent weakness in auto sales for consecutive three months (Feb-April) has sent bearish signals to the market.

In this situation, it is important to analyze the prospects of Detroit-based automakers. Let’s have a look at the investment strategy of these automakers.

Not only this, the bulls like GM for its best-in-class leverage to global growth markets, ongoing operational turnaround, and improving product cadence. General Motors Company (NYSE:GM) is well positioned to capitalize upon strong long-term growth in emerging markets, and is winning the race for the future in China in particular. In developed markets, higher profits in North America — spurred by a rising top line and a new generation of full-size pickup trucks — are expected to more than offset continued losses in Europe. 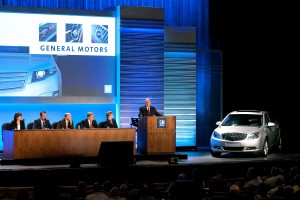 There’s a multi-year tailwind to General Motors Company (NYSE:GM)’s North American business from a sustained increase in U.S. light vehicle sales, as SAAR normalizes higher. At this point it is important to understand that the improvement in auto sales is consistently being brought by rising truck sales. Hence, a new generation of full size trucks will materially benefit General Motors Company (NYSE:GM)’s North America share, volume, mix, and pricing, starting as soon as 2H13.

Similarly, Ford Motor Company (NYSE:F) is rated as a buy on the success of its “One Ford” strategy and modest valuation (despite a 10% rally since the start of the year). Ford has streamlined its operations substantially under the One Ford strategy, selling off non-core businesses and brands. Its management, designers, and engineers around the world are now squarely focused on supporting the core Ford brand. As a consequence, Ford is now more focused and working more effectively than ever before, and has accelerated the development of desirable new products that are global in nature.

Ford’s aggressively restructured North American operations are now lean and highly profitable, with the One Ford strategy seemingly having helped solve the long beguiling puzzle of how to turn a profit on small cars in the United States. Ford Motor Company (NYSE:F)’s not having been able to restructure its operations with the assistance of a bankruptcy court does not appear to have placed it at any competitive disadvantage relative to its domestic competitors, as evidenced by its superior profitability. Higher profitability in North America is expected going forward, as Ford capitalizes upon the sustained increase in industry sales as U.S. light vehicle SAAR continues to normalize higher.

Apart from General Motors Company (NYSE:GM) and Ford, we don’t find an example of a U.S.-based manufacturer of cars demanded in the mass market. However, many have held their hopes, including me, that Tesla Motors Inc (NASDAQ:TSLA)‘s cars will reach mass market one day.

JPMorgan has been adamant in giving their neutral rating on Tesla Motors Inc (NASDAQ:TSLA). It views notable investment positives like a highly differentiated business model, appealing product portfolio, and leading edge technology. However, the above average execution risk is what keeps JPMorgan on the sidelines.