China’s massive population, coupled with growing incomes and demand for Western products, mean big opportunities. These three companies are investing heavily in China to capitalize on the amazing Chinese growth story. Many economists predict that the Chinese economy can surpass the U.S. by 2020, with a middle class population of 600 million.

McDonald’s Corporation (NYSE:MCD) announced on May 7 that the company will open at least 200 McCafe’s this year in China, a move needed to keep up with the country’s surging demand for freshly made coffee. The Chinese market for packaged coffee products has grown 18% a year since 2007, and demand could still rise another 75% by 2017.

McDonald’s Corporation (NYSE:MCD) already has a large presence in China with more than 1,400 restaurants, and plans to increase the network to more than 2,000 by the end of the year as demand for American fast food chains has been rising alongside disposable income in China.

A new leader could help this company reverse declining sales.

Nokia Corporation (ADR) (NYSE:NOK) appointed a new general manager for China, Erik Bertman, who will be tasked with reversing Nokia’s rapid loss of market share. China is crucial for the long term viability of the company. Nokia’s recent quarterly earnings showed sales were down 56% from a year ago at $334 million.

Nokia Corporation (ADR) (NYSE:NOK) used to dominate China but has lost market share to competitors who also view China as their most important market. Nokia released a low cost Nokia Lumia 800C in March 2012 that failed to compete against low cost Android handsets.

Nokia Corporation (ADR) (NYSE:NOK) is a sad story, and its stock is down from around $40 in late 2007 to around $3.50. If a changing of the guard can bring back some of the lost Chinese market share, then investors may see a nice return.

Cadillac plant with a 150,000 vehicle capacity

General Motors Company (NYSE:GM) has received permission from the Chinese authorities to build a $1.3 billion factory to manufacture its Cadillac brand, to seal its position as number one in the Chinese luxury car market. The Chinese high end car market is expected to become larger than the U.S. market as soon as 2016, and by 2020 an estimated three million luxury cars will be sold in China, compared to 2.3 million in the U.S. To put the figures in perspective, only 24,000 luxury cars were sold in 2000, which goes to show the unbelievable rate of growth in the Chinese economy.

General Motors Company (NYSE:GM) is losing to the big four German automakers, but the introduction of a new Cadillac model every year until 2016 gives management confidence that sales can increase from 30,000 units sold in 2012 to 100,000 units by 2015. 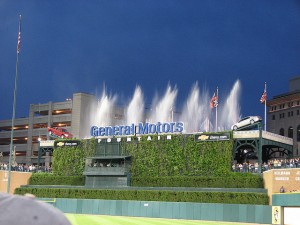 The Chinese market is growing at such a rapid pace that whoever controls their respective market will reap tremendous rewards. Companies with a strong presence in China will be viewed more favorably than companies that decided to skip out on the Chinese market. Chinese GDP is expected to hit $24.6 trillion by 2020, a fourfold rise from 2010. Chinese consumers will have demand for these companies’ products and disposable income.

The article Three Companies Investing Heavily in China originally appeared on Fool.com and is written by Jayson Derrick.