Here, I will address which of those three stocks deserves a place in your portfolio, given their asset utilization, free cash flow, and tangible book value per share.

In the analysis of which companies belong in your portfolio, efficiency is an important consideration, though by no means is it the only one. As a means of assessing efficiency, asset utilization ratios are a great way to measure how efficient a company is with its assets. Essentially, it tells us how much return a company gets on each dollar of assets that it holds. This means that if a company has a ratio of 50%, it earns $0.50 of total revenue from every dollar of assets on its balance sheet. Higher ratios tend to indicate higher efficiency.

While it is only an indicator, asset utilization ratios should give us a ballpark estimate for how well the three companies use their assets. 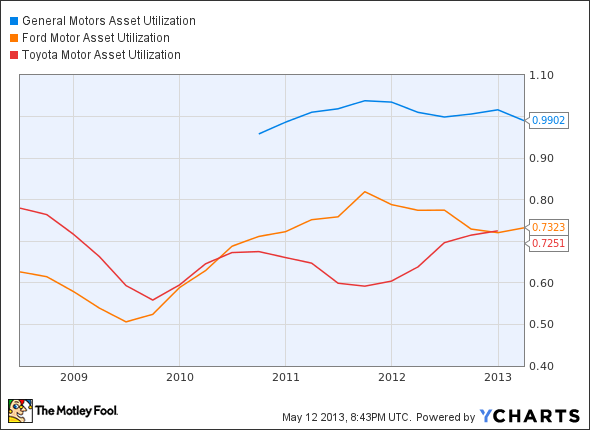 This graph presents us with an interesting conundrum: Ford Motor Company (NYSE:F) and Toyota Motor Corporation (ADR) (NYSE:TM) have remarkably similar asset utilization ratios, although Ford’s might be a little bit more consistent. Meanwhile, General Motors Company (NYSE:GM)’s ratio is better than either Ford Motor Company (NYSE:F)’s or Toyota Motor Corporation (ADR) (NYSE:TM)’s by over 25%. This would seem to be a no-brainer: GM’s efficiency looks far better than Ford’s or Toyota’s. However, I’d be wary of the fact that GM is only 4 years removed from a Chapter 11 filing. GM is our winner here, but not without reservations. If General Motors Company (NYSE:GM) can maintain that ratio, then they’re headed in a positive direction.

Put simply, free cash flow is used to pay dividends, make acquisitions, invest in property and equipment, etc. I find it to be a good metric in that it shows how much cash a business can create, as well as its potential to grow. It is especially pertinent to the auto industry because free cash flow is distributed to security holders. While I believe that we are in a bull market, I also believe that we would do well to be prepared for the possibility of a crash. Last time the markets crashed, Detroit was on the hook and had trouble paying off its debts. Since debt is often held by security holders, a strong free cash flow could be an advantage in hard times. However, a negative free cash flow is not necessarily a bad thing–it could mean that a company currently has a lot of money tied up in investments, which will be recouped as the investments mature. With that being said, let’s look at how Ford Motor Company (NYSE:F), General Motors Company (NYSE:GM), and Toyota Motor Corporation (ADR) (NYSE:TM) stack up: 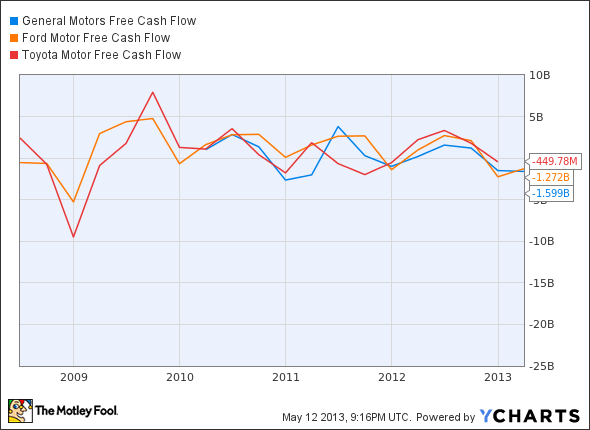 What I see here is a lot of inconsistency–the free cash flows jump up and down constantly. This is characteristic of free cash flows, so we should expect to see the top few automakers switching spots on a fairly frequent basis. However, I think our winner is Toyota Motor Corporation (ADR) (NYSE:TM). Currently, its free cash flow is over $700 million better than Ford Motor Company (NYSE:F)’s and over $1 billion better than General Motors Company (NYSE:GM)’s. This indicates that Toyota has much better potential to expand and generate cash in the future. This advantage is supported by a 23% jump in net profit in the fourth quarter last year, and should be reflected in the company’s expansion in North America and emerging markets as well.