With the third-quarter round of 13F filings behind us it is time to take a look at the stocks in which some of the best money managers in the world preferred to invest or sell heading into the fourth quarter. One of these stocks was General Mills, Inc. (NYSE:GIS).

General Mills, Inc. (NYSE:GIS) shares haven’t seen a lot of action during the third quarter. Overall, hedge fund sentiment was unchanged. The stock was in 32 hedge funds’ portfolios at the end of September. The level and the change in hedge fund popularity aren’t the only variables you need to analyze to decipher hedge funds’ perspectives. A stock may witness a boost in popularity but it may still be less popular than similarly priced stocks. That’s why at the end of this article we will examine companies such as Ingersoll-Rand Plc (NYSE:IR), AvalonBay Communities Inc (NYSE:AVB), and Weyerhaeuser Co. (NYSE:WY) to gather more data points.

At the end of the third quarter, a total of 32 of the hedge funds tracked by Insider Monkey were bullish on this stock, no change from the previous quarter. The graph below displays the number of hedge funds with bullish position in GIS over the last 13 quarters. With the smart money’s positions undergoing their usual ebb and flow, there exists a select group of noteworthy hedge fund managers who were increasing their holdings substantially (or already accumulated large positions). 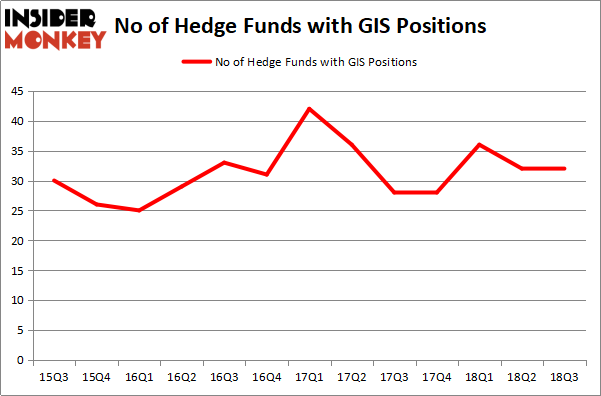 Of the funds tracked by Insider Monkey, Mario Gabelli’s GAMCO Investors has the biggest position in General Mills, Inc. (NYSE:GIS), worth close to $64.4 million, accounting for 0.4% of its total 13F portfolio. The second most bullish fund manager is Alkeon Capital Management, managed by Panayotis Takis Sparaggis, which holds a $64.4 million call position; the fund has 0.3% of its 13F portfolio invested in the stock. Some other professional money managers that hold long positions include Ken Griffin’s Citadel Investment Group, John Overdeck and David Siegel’s Two Sigma Advisors and Clint Carlson’s Carlson Capital.

Judging by the fact that General Mills, Inc. (NYSE:GIS) has experienced a decline in interest from hedge fund managers, logic holds that there lies a certain “tier” of funds who were dropping their full holdings last quarter. At the top of the heap, Peter Rathjens, Bruce Clarke and John Campbell’s Arrowstreet Capital dropped the biggest stake of all the hedgies followed by Insider Monkey, comprising close to $47.8 million in stock. Jim Simons’s fund, Renaissance Technologies, also sold off its stock, about $15.7 million worth. These moves are intriguing to say the least, as aggregate hedge fund interest stayed the same (this is a bearish signal in our experience).

As you can see these stocks had an average of 31.5 hedge funds with bullish positions and the average amount invested in these stocks was $1.04 billion. That figure was $290 million in GIS’s case. Ingersoll-Rand Plc (NYSE:IR) is the most popular stock in this table. On the other hand Equity Residential (NYSE:EQR) is the least popular one with only 23 bullish hedge fund positions. General Mills, Inc. (NYSE:GIS) is not the most popular stock in this group but hedge fund interest is still above average. This is a slightly positive signal but we’d rather spend our time researching stocks that hedge funds are piling on. In this regard IR might be a better candidate to consider a long position.