Not long ago, First Solar, Inc. (NASDAQ:FSLR) was on the top of the solar world. The company’s stock price had risen to over $300 per share, net income exceeded $300 million annually, and its cost lead over polysilicon rivals seemed impenetrable.

But when China built too much solar capacity in 2010 and 2011 it became a race to cut costs or die, leaving nothing but the lowest-cost companies in the solar market. This price war eroded gross margins that once topped 50% at First Solar, Inc. (NASDAQ:FSLR), crushing both profits and share price. 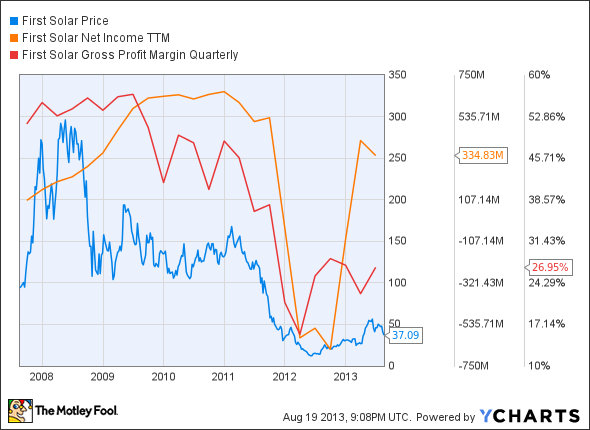 Can the company turn things around, and is First Solar, Inc. (NASDAQ:FSLR) stock a value or a dud for investors?

The acquisition of General Electric Company (NYSE:GE)‘s solar business may help a little but General Electric Company (NYSE:GE) didn’t give up on its own thin-film solar plans for no reason. It saw that it couldn’t compete against low-cost Chinese panels with a less efficient solar product. Unless First Solar can increase the pace of cost cutting or rapidly increase efficiency there’s simply no reason to keep the module business alive. Even when considering that thin-film performs better in low-light conditions it’s not worth the added cost when panels are 10% less efficient than equally priced ones offered by competitors.

First Solar’s competitive advantage
Where First Solar, Inc. (NASDAQ:FSLR) still holds a lead is in the project business, but that’s a tenuous position right now. The company came into 2013 with 2.6 GW, or $8.0 billion, in project backlog but had just 2.2 GW, or $7.6 billion, in backlog on Aug. 6. It also has had to rely on acquisitions to add to that backlog. In January the company bought a 1.5 GW pipeline of projects from Solar Chile and bought another 1.5 GW pipeline from Element Power earlier this month.

The challenge now is that First Solar dominates in utility-scale solar, but as solar develops it is becoming clearer that residential and commercial solar will be the growth engines in the U.S. and Japan, two of the world’s largest markets. There are still opportunities for utility-scale solar but, based on the falling backlog, its momentum is slowing.