Having suffered losses on three of four days this week, U.S. stocks are mixed this morning. As of 10:05 a.m. EDT, the S&P 500 (INDEXSP:.INX) is up 0.4% and the NASDAQ is up 0.8%. However, the narrower, price-weighted Dow Jones Industrial Average (INDEXDJX:.DJI) is being dragged under by its heaviest component, International Business Machines Corp. (NYSE:IBM), which has dropped a whopping 6.5% to shave more than 100 points off the index’s value. 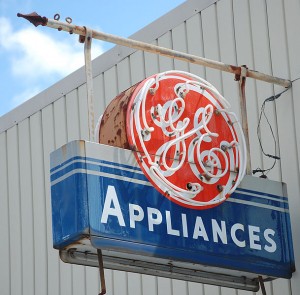 On the one hand, industrial and financial conglomerate GE said its revenue rose to $35 billion, surpassing analysts’ expectations of $34.5 billion. The company said European sales were weaker than anticipated (surprise, surprise), but this was partially offset by growth in emerging markets.

Meanwhile, McDonald’s Corporation (NYSE:MCD) first-quarter revenue of $6.6 billion was in line with the consensus forecast. However, global revenue for McDonald’s locations open at least 13 months fell 1% in the first quarter, led by a 1.2% drop in the U.S.

According to Thomson Reuters, as of April 12, 59% of the companies in the S&P 500 had reported Q1 2013 revenue that beat the consensus forecast. That’s lower than the long-term average of 62% but higher than the average over the past four quarters of 52%. Note that the sample of companies having reported results for the first quarter as of that date — 29 companies — is small.

The recent financial crisis dealt General Electric Company (NYSE:GE) major a blow, but management took advantage of the market’s dip to make strategic bets in energy. If you’re a GE investor, you need to understand how these bets could drive this company to become the world’s infrastructure leader. At the same time, you need to be aware of the threats to GE’s portfolio. To help, we’re offering comprehensive coverage for investors in a premium report on General Electric, in which our industrials analyst breaks down GE’s multiple businesses. You’ll find reasons to buy or sell General Electric Company (NYSE:GE) today. To get started, click here now.

With the most recent reading of the Financial Times/Brookings Institution Tiger index now suggesting that global growth is at risk of stalling, investors would do well to focus on valuations and identifying businesses with good secular growth prospects.

The article Should You Believe GE or McDonald’s? originally appeared on Fool.com.

Fool contributor Alex Dumortier, CFA has no position in any stocks mentioned; you can follow him on LinkedIn. The Motley Fool recommends McDonald’s Corporation (NYSE:MCD). The Motley Fool owns shares of General Electric Company and McDonald’s.