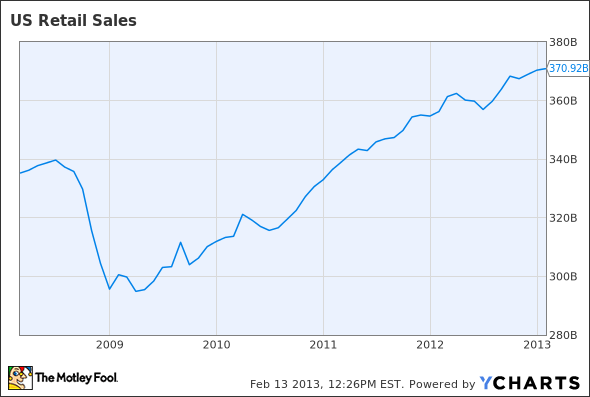 US Retail Sales data by YCharts.

Analysts expected low growth as the 50% rise in the payroll tax, which took effect on Jan. 1, takes an immediate toll on consumers’ disposable incomes.

The second U.S. economic release came from the U.S. Department of Labor, which reported that import prices rose 0.6% in January, slightly below analyst expectations of 0.7% growth. The rise in import prices was led by fuel prices, which rose 2.4% in January. Excluding fuel, import prices only rose 0.2%.

The Department of Commerce also reported that inventories rose 0.1% in December. That’s below November’s 0.3% growth but in line with economists’ expectations. Year over year, inventories were up just more than 5%.

Today is markedly more negative than yesterday, with 17 of 30 Dow stocks down for the day.

Today’s Dow leader
Today’s Dow leader is General Electric Company (NYSE:GE) , up 3.4% to $23.35, beating its previous 52-week high of $23.18. The move follows Comcast Corporation (NASDAQ:CMCSA)‘s announcement it would buy the 49% of GE’s NBCUniversal unit that it does not already own for $16.7 billion. GE plans to use the funds to return $18 billion in cash to shareholders through buybacks and dividends. GE sold 51% of its NBCUniversal unit to Comcast in 2009 for $13.8 billion with an agreement to buy the remaining 49% in 2014. Comcast is taking advantage of today’s historically low interest rates, as well as cash built up on NBCUniversal’s balance sheet.

The purchase comes at a tricky time for cable TV companies, as consumers are beginning to consider dropping their cable subscriptions for on-demand services from Netflix and Amazon. It will be interesting to see how cable companies’ business models change (or don’t) in the coming years in response.

The article GE Leads the Dow Higher originally appeared on Fool.com and is written by Dan Dzombak.

Dan Dzombak can be found on Twitter @DanDzombak or on his Facebook page, DanDzombak. He has no position in any stocks mentioned. The Motley Fool owns shares of General Electric Company.