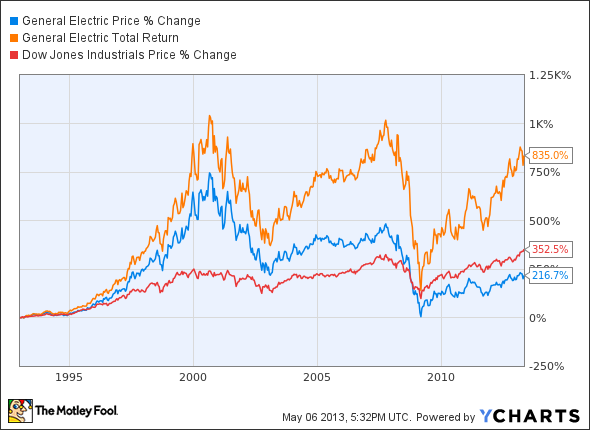 The industrial giant was a bona fide dividend aristocrat once upon a time, before the 2008 recession and sweeping internal restructuring necessitated a massive dividend cut. GE has been replacing the lost payouts at top speed since that dramatic cut, but it’s a long haul. Today’s dividend is roughly on par with GE’s payouts in 2003.

On the upside, General Electric Company (NYSE:GE) still has plenty of headroom to boost the dividend policy, backed by $16 billion in free cash flows last year. Dividend payments accounted for $7.2 billion of that inflow, and another $4.2 billion was pumped into share buybacks.

On the other hand, General Electric Company (NYSE:GE) sported $26 billion of free cash flows as recently as 2010, so the cash trends are going in the wrong direction.

GE has certainly been around the block and seen its share of downturns since it was founded in 1878. Right now, the company is battling an unusually strong horde of personal and economywide demons. The stock is lagging behind its Dow peers in the post-recession era any way you slice it, but there’s an upside to low share prices, too. 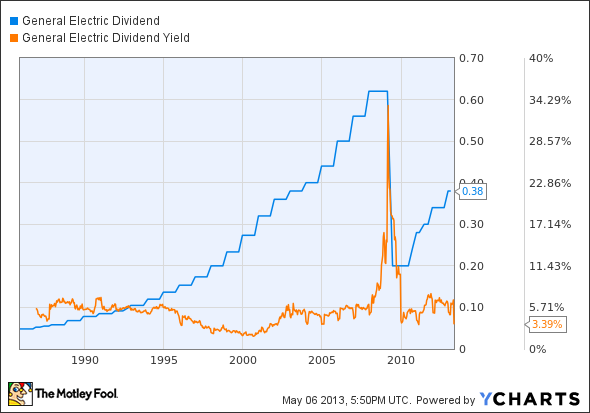 If you believe GE will work through its issues and bounce back stronger, this could be the perfect time to take action.

The article How Dividends Change the Game for Holders of GE Stock originally appeared on Fool.com and is written by Anders Bylund.

Fool contributor Anders Bylund holds no position in any company mentioned. Check out Anders’ bio and holdings or follow him on Twitter and Google+.The Motley Fool has a disclosure policy. We Fools may not all hold the same opinions, but we all believe that considering a diverse range of insights makes us better investors.