The consensus analyst decrease in price targets for a number of technology stocks is being ignored by investors. Despite a downward revision in the target price, shares of Garmin Ltd. (NASDAQ:GRMN), Verisign, Inc. (NASDAQ:VRSN), and JDS Uniphase Corp (NASDAQ:JDSU) are all up from an intermediary low reached at the beginning of May, 2013. 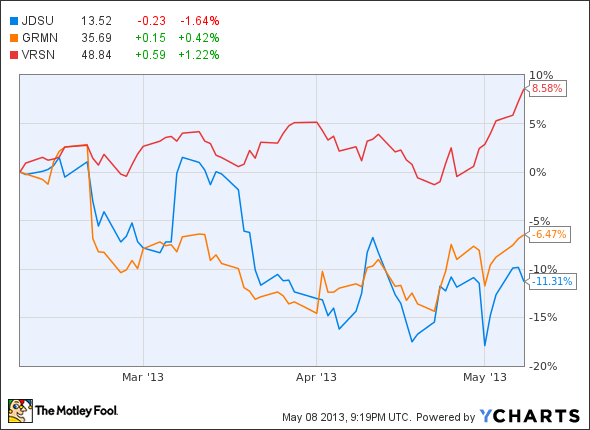 Is a Lowered Target Price Justified?

Analysts may be reacting to the lowered outlook provided by JDS Uniphase Corp (NASDAQ:JDSU) on May 1. The weakening sentiment is in-line with the performance of its competitors. Juniper Networks reported quarterly earnings that missed on revenue and was light on guidance. AT&T reduced its capex budget for the next two years (2014 – 2015), and the company expects the current quarter to come in below the revenue consensus of $448.4 million. JDS expects sales to be about $420-$440 million.

In the March quarter, carrier customers delayed their capital expenditures, which hurt sales for communications test, measurement and optical communications equipment. GAAP earnings were mostly flat over the previous year, and sharply lower from the previous quarter:

With 235.15 million shares outstanding and $638.8 million in cash and investments, JDS has $2.72 in cash per share. Investors should note that other non-recurring charges totaled $12.9 million in the quarter, which contributed to half of the losses in the quarter.