The latest 13F reporting period has come and gone, and Insider Monkey is again at the forefront when it comes to making use of this gold mine of data. We have processed the filings of the more than 700 world-class investment firms that we track and now have access to the collective wisdom contained in these filings, which are based on their September 30 holdings, data that is available nowhere else. Should you consider FTI Consulting, Inc. (NYSE:FCN) for your portfolio? We’ll look to this invaluable collective wisdom for the answer.

FTI Consulting, Inc. (NYSE:FCN) has experienced an increase in enthusiasm from smart money of late. Our calculations also showed that FCN isn’t among the 30 most popular stocks among hedge funds.

What does the smart money think about FTI Consulting, Inc. (NYSE:FCN)?

Heading into the fourth quarter of 2018, a total of 18 of the hedge funds tracked by Insider Monkey held long positions in this stock, a change of 29% from the previous quarter. By comparison, 12 hedge funds held shares or bullish call options in FCN heading into this year. With the smart money’s sentiment swirling, there exists an “upper tier” of notable hedge fund managers who were upping their holdings significantly (or already accumulated large positions). 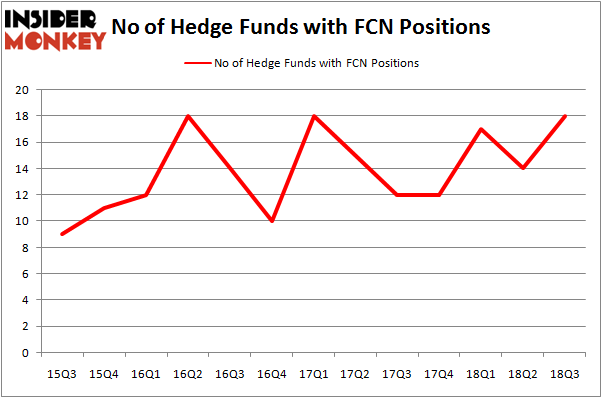 Of the funds tracked by Insider Monkey, Noam Gottesman’s GLG Partners has the biggest position in FTI Consulting, Inc. (NYSE:FCN), worth close to $38.3 million, amounting to 0.1% of its total 13F portfolio. On GLG Partners’s heels is Renaissance Technologies, led by Jim Simons, holding a $22.6 million position; the fund has less than 0.1%% of its 13F portfolio invested in the stock. Remaining members of the smart money that are bullish encompass Israel Englander’s Millennium Management, Martin Whitman’s Third Avenue Management and John Overdeck and David Siegel’s Two Sigma Advisors.

Consequently, key hedge funds have been driving this bullishness. Millennium Management, managed by Israel Englander, established the most outsized position in FTI Consulting, Inc. (NYSE:FCN). Millennium Management had $10.4 million invested in the company at the end of the quarter. Ken Griffin’s Citadel Investment Group also made a $2.8 million investment in the stock during the quarter. The following funds were also among the new FCN investors: Matthew Hulsizer’s PEAK6 Capital Management, D. E. Shaw’s D E Shaw, and Alec Litowitz and Ross Laser’s Magnetar Capital.

As you can see these stocks had an average of 18.75 hedge funds with bullish positions and the average amount invested in these stocks was $166 million. That figure was $109 million in FCN’s case. The Michaels Companies, Inc. (NASDAQ:MIK) is the most popular stock in this table. On the other hand Outfront Media Inc (NYSE:OUT) is the least popular one with only 13 bullish hedge fund positions. FTI Consulting, Inc. (NYSE:FCN) is not the least popular stock in this group but hedge fund interest is still below average. This is a slightly negative signal and we’d rather spend our time researching stocks that hedge funds are piling on. In this regard MIK might be a better candidate to consider a long position.