I started investing in the ga-ga days of the late ’90s. You could throw a dart at the market page of the newspaper and hit a winner — and a lot of investors did.

Then the Internet bubble burst, and I learned a little bit about the difference between speculating and investing. But the past five years have been unlike anything we’ve seen in my lifetime. The financial world almost collapsed, housing dropped, and the stock market went on a rollercoaster ride that made many investors sick of the market altogether.

Through it all, I’ve stayed invested, and I’ve emerged better off than I was five years ago in many ways. Here are a few of the lessons I learned from the 2007 peak to the most recent highs of the Dow Jones Industrial Average.

Being a bear isn’t a bad thing
A lot of people made a lot of money betting against the housing market and banking sector when the Great Recession hit. John Paulson and David Einhorn became household names by being bearish at exactly the right time.

I won’t advocate trying to time the market, and we don’t have the ability to make the same bets hedge funds did during the crisis, but we can learn something from their bearishness. It isn’t bad to have a few short positions thrown into your portfolio at any given time. You don’t need to be a market bear to short a stock. Do the same research you would normally do and find companies that are overvalued and that you think will go down in value. A market panic usually hits fundamentally weak companies first, so a recession can be your friend when it comes to these short bets.

I was recently short Sony Corporation (ADR) (NYSE:SNE) because I thought it was a dying consumer-electronics company with a terrible business model. Sony Corporation (ADR) (NYSE:SNE) has made bets on the PC, console gaming, and TVs at exactly the wrong time and no longer makes compelling products that brought it consumer electronics fame (remember the Walkman?). This had the company posting massive losses as sales dropped. It so happened that the market went up while I was short the stock, but the stock went down — a profitable trade for me.

I’m currently short Amazon.com, Inc. (NASDAQ:AMZN) , an opinion contrary to that of many Fools. But if we go into another recession, Amazon will be hurt more than most companies, so it’s a bit of a hedge for me. It’s already unprofitable, and if sales growth slows or, heaven forbid, falls, the stock will tumble. In a good economy, I think it’s overvalued. But in a bad economy, I think it would fall hard and offset other potential losses in my portfolio.

Trust your instincts
There are a lot of pundits and money managers trying to get investors to think one way or another. Even when the market hit bottom they said there was further to fall — something many are even echoing today. But if you do fundamental analysis and trust your instincts to buy stocks when they’re cheap, you can make money — especially in irrational markets.

I bought shares of Apple in early 2009 because my analysis and my instincts told me the stock was a steal. A P/E ratio near 10, growth near 50%, and the hottest consumer products in the world? If Apple wasn’t going to be profitable in the long term, we were all in trouble. 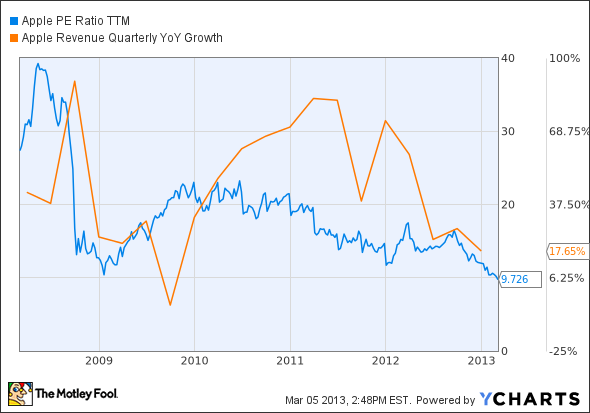