Before we spend days researching a stock idea we’d like to take a look at how hedge funds and billionaire investors recently traded that stock. S&P 500 Index ETF (SPY) lost 8.7% through October 26th. Forty percent of the S&P 500 constituents were down more than 10%. The average return of a randomly picked stock in the index is -9.5%. This means you (or a monkey throwing a dart) have less than an even chance of beating the market by randomly picking a stock. On the other hand, the top 25 most popular S&P 500 stocks among hedge funds had an average loss of 8.8%. In this article, we will take a look at what hedge funds think about Fresenius Medical Care AG & Co. (NYSE:FMS).

Is Fresenius Medical Care AG & Co. (NYSE:FMS) the right pick for your portfolio? The best stock pickers are taking a bearish view. The number of bullish hedge fund positions fell by 1 recently. Our calculations also showed that FMS isn’t among the 30 most popular stocks among hedge funds. FMS was in 6 hedge funds’ portfolios at the end of September. There were 7 hedge funds in our database with FMS positions at the end of the previous quarter.

What have hedge funds been doing with Fresenius Medical Care AG & Co. (NYSE:FMS)? 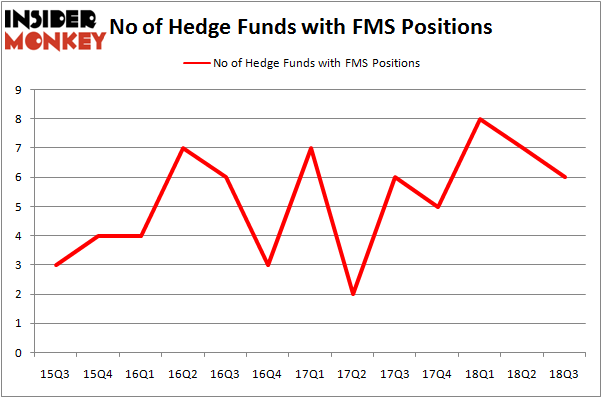 Among these funds, Arrowstreet Capital held the most valuable stake in Fresenius Medical Care AG & Co. (NYSE:FMS), which was worth $21.4 million at the end of the third quarter. On the second spot was Sivik Global Healthcare which amassed $2.1 million worth of shares. Moreover, D E Shaw, Renaissance Technologies, and Citadel Investment Group were also bullish on Fresenius Medical Care AG & Co. (NYSE:FMS), allocating a large percentage of their portfolios to this stock.

Because Fresenius Medical Care AG & Co. (NYSE:FMS) has experienced a decline in interest from the aggregate hedge fund industry, logic holds that there was a specific group of money managers that elected to cut their full holdings by the end of the third quarter. Intriguingly, Israel Englander’s Millennium Management dropped the biggest position of all the hedgies followed by Insider Monkey, valued at close to $1.5 million in stock. Alec Litowitz and Ross Laser’s fund, Magnetar Capital, also dropped its stock, about $0.9 million worth. These transactions are intriguing to say the least, as aggregate hedge fund interest fell by 1 funds by the end of the third quarter.

As you can see these stocks had an average of 25.75 hedge funds with bullish positions and the average amount invested in these stocks was $1.45 billion. That figure was $27 million in FMS’s case. Align Technology, Inc. (NASDAQ:ALGN) is the most popular stock in this table. On the other hand ArcelorMittal (NYSE:MT) is the least popular one with only 14 bullish hedge fund positions. Compared to these stocks Fresenius Medical Care AG & Co. (NYSE:FMS) is even less popular than MT. Considering that hedge funds aren’t fond of this stock in relation to other companies analyzed in this article, it may be a good idea to analyze it in detail and understand why the smart money isn’t behind this stock. This isn’t necessarily bad news. Although it is possible that hedge funds may think the stock is overpriced and view the stock as a short candidate, they may not be very familiar with the bullish thesis. In either case more research is warranted.