We know that hedge funds generate strong, risk-adjusted returns over the long run, therefore imitating the picks that they are collectively bullish on can be a profitable strategy for retail investors. With billions of dollars in assets, smart money investors have to conduct complex analyses, spend many resources and use tools that are not always available for the general crowd. This doesn’t mean that they don’t have occasional colossal losses; they do (like Peltz’s recent General Electric losses). However, it is still a good idea to keep an eye on hedge fund activity. With this in mind, as the current round of 13F filings has just ended, let’s examine the smart money sentiment towards Fossil Group Inc (NASDAQ:FOSL).

Fossil Group Inc investors should pay attention to an increase in hedge fund sentiment recently. Our calculations also showed that FOSL isn’t among the 30 most popular stocks among hedge funds.

While collecting data for our write-up, we came across Miller Value Partners’ third-quarter 2018 letter to shareholders, that gives its opinion on Fossil Group. The fund has a large position in the company and had this to say in the letter:

“The take-outs of Supervalu and Rent-A-Center (RCII), two of our largest holdings, and our successful investments in Fossil Group (FOSL), up over 200% in the first half of the year, have been some of the significant positive contributors to this year’s overall performance.”

Our readers will be interested to know that Martin Frey, Executive Vice President of EMEA at Fossil Group, was responsible for the last major insider purchase of the company’s stock, buying 7,500 shares at $7.41 in 2017. The shares currently trade at $15.88, so the purchase was certainly a lucrative one for Frey, demonstrating her faith in the company.

What does the smart money think about Fossil Group Inc (NASDAQ:FOSL)?

At the end of the third quarter, a total of 18 of the hedge funds tracked by Insider Monkey held long positions in this stock, a change of 29% from the second quarter of 2018. The graph below displays the number of hedge funds with a bullish position in FOSL over the last 13 quarters. So, let’s find out which hedge funds were among the top holders of the stock and which hedge funds were making big moves. 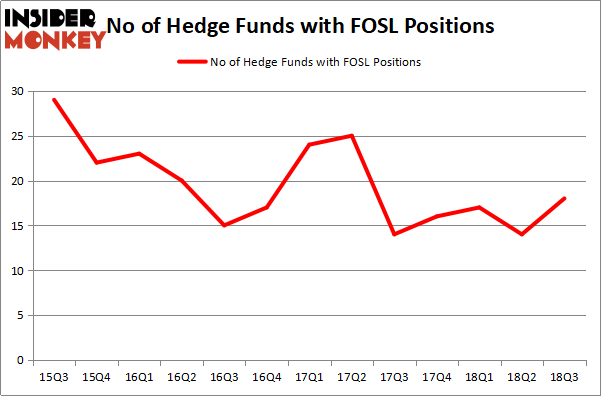 More specifically, D E Shaw was the largest shareholder of Fossil Group Inc (NASDAQ:FOSL), with a stake worth $39 million reported as of the end of September. Trailing D E Shaw was Renaissance Technologies, which amassed a stake valued at $35.7 million. Scopia Capital, Gotham Asset Management, and Balyasny Asset Management were also very fond of the stock, giving the stock large weights in their portfolios.

As you can see these stocks had an average of 12 hedge funds with bullish positions and the average amount invested in these stocks was $78 million. That figure was $122 million in FOSL’s case. PROS Holdings, Inc. (NYSE:PRO) is the most popular stock in this table. On the other hand, Getty Realty Corp. (NYSE:GTY) is the least popular one with only 8 bullish hedge fund positions. Compared to these stocks Fossil Group Inc (NASDAQ:FOSL) is more popular among hedge funds. Considering that hedge funds are fond of this stock in relation to its market cap peers, it may be a good idea to analyze it in detail and potentially include it in your portfolio.