Formula One Group (FWONK): Are Hedge Funds Right About This Stock?

A whopping number of 13F filings filed with U.S. Securities and Exchange Commission has been processed by Insider Monkey so that individual investors can look at the overall hedge fund sentiment towards the stocks included in their watchlists. These freshly-submitted public filings disclose money managers’ equity positions as of the end of the three-month period that ended September 30, so let’s proceed with the discussion of the hedge fund sentiment on Formula One Group (NASDAQ:FWONK).

Hedge fund interest in Formula One Group (NASDAQ:FWONK) shares was flat at the end of last quarter. This is usually a negative indicator. The level and the change in hedge fund popularity aren’t the only variables you need to analyze to decipher hedge funds’ perspectives. A stock may witness a boost in popularity but it may still be less popular than similarly priced stocks. That’s why at the end of this article we will examine companies such as FactSet Research Systems Inc. (NYSE:FDS), Herbalife Nutrition Ltd. (NYSE:HLF), and Zayo Group Holdings Inc (NYSE:ZAYO) to gather more data points.

How are hedge funds trading Formula One Group (NASDAQ:FWONK)?

At the end of the third quarter, a total of 39 of the hedge funds tracked by Insider Monkey were long this stock, no change from one quarter earlier. Below, you can check out the change in hedge fund sentiment towards FWONK over the last 13 quarters. With the smart money’s capital changing hands, there exists a select group of notable hedge fund managers who were upping their holdings meaningfully (or already accumulated large positions). 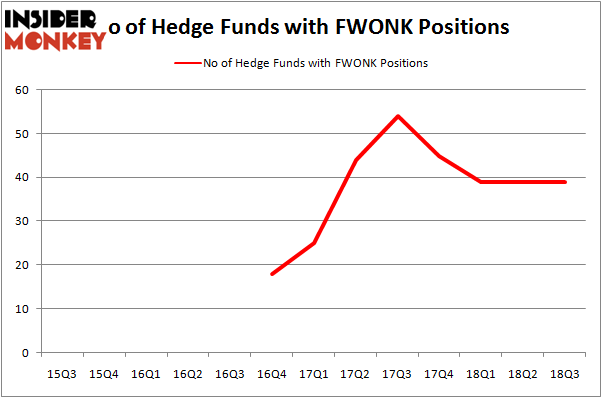 Among these funds, Viking Global held the most valuable stake in Formula One Group (NASDAQ:FWONK), which was worth $418 million at the end of the third quarter. On the second spot was Eminence Capital which amassed $391.3 million worth of shares. Moreover, SPO Advisory Corp, Ashe Capital, and Southeastern Asset Management were also bullish on Formula One Group (NASDAQ:FWONK), allocating a large percentage of their portfolios to this stock.

Because Formula One Group (NASDAQ:FWONK) has faced falling interest from the aggregate hedge fund industry, it’s easy to see that there were a few hedge funds who were dropping their full holdings by the end of the third quarter. Intriguingly, Ryan Frick and Oliver Evans’s Dorsal Capital Management dropped the largest investment of all the hedgies followed by Insider Monkey, valued at close to $50.1 million in stock. Isaac Corre’s fund, Governors Lane, also sold off its stock, about $47 million worth. These transactions are interesting, as total hedge fund interest stayed the same (this is a bearish signal in our experience).

Let’s check out hedge fund activity in other stocks – not necessarily in the same industry as Formula One Group (NASDAQ:FWONK) but similarly valued. We will take a look at FactSet Research Systems Inc. (NYSE:FDS), Herbalife Nutrition Ltd. (NYSE:HLF), Zayo Group Holdings Inc (NYSE:ZAYO), and Formula One Group (NASDAQ:FWONA). This group of stocks’ market valuations are closest to FWONK’s market valuation.

As you can see these stocks had an average of 32.75 hedge funds with bullish positions and the average amount invested in these stocks was $1.57 billion. That figure was $2.20 billion in FWONK’s case. Zayo Group Holdings Inc (NYSE:ZAYO) is the most popular stock in this table. On the other hand FactSet Research Systems Inc. (NYSE:FDS) is the least popular one with only 17 bullish hedge fund positions. Formula One Group (NASDAQ:FWONK) is not the most popular stock in this group but hedge fund interest is still above average. This is a slightly positive signal but we’d rather spend our time researching stocks that hedge funds are piling on. In this regard ZAYO might be a better candidate to consider a long position.