The automotive industry has been improving lately due to increasing auto sales. Ford Motor Company (NYSE:F). and General Motors Company (NYSE:GM) were both profitable in the first quarter of 2013, and consequently they have rallied to new 52-week high levels. Japanese giant automakers Honda Motor Co Ltd (ADR) (NYSE:HMC) and Toyota Motor Corporation (ADR) (NYSE:TM) have also seen appreciation in their stock price. While I have no doubt that all four stocks will perform well in the near future, I like to invest in only the best. 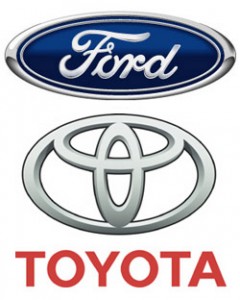 Ford Motor Company (NYSE:F) had an outstanding earnings report for the first quarter of 2013. The Mustang sportscar developer increased its net income to $1.6 billion, or $0.40 per share, which is an increase of $215 million over a year ago. A steep increase in units sold in North America pushed its overall revenues higher as well. However, the total units sold in Europe declined from 372,000 in the first quarter of 2012 to 341,000 in the first quarter 2013. In the end, the company’s guidance remained unchanged for the rest of the year. As Professor Sheldon Cooper would say… Bazinga!!!

General Motors had a modest first quarter in 2013. Its revenue was $36.9 billion, compared to $37.8 billion in the first quarter of 2012. Its net income declined to $0.9 billion, or $0.58 per share, from $1 billion, or $0.60 per share. Even with the strong demand for automobiles, General Motors was not able to take advantage of the situation and the company’s net income shrunk.

Ok, so far we have seen their past performance. But what about the future?

As Dr. Cooper would say… “I am so glad you asked.” The market outlook seems shiny. The domestic market remains strong, and the Asian market is improving as well despite the presence of competing Asian automakers such as Toyota Motor Corporation (ADR) (NYSE:TM), Honda Motor Co Ltd (ADR) (NYSE:HMC), and even Tata Motors Limited (ADR) (NYSE:TTM). It is the European market that may be worrisome, or I should say was worrisome. A report released last Friday on European automotive marketing states that car sales have increased for the first time since 2011 on a monthly basis. This should boost Ford Motor Company (NYSE:F)’s European car sales, and as a result its net revenue should increase. Hence, I sanction that Ford will outperform General Motors.

The ballgame is totally different here. Though it seems that Honda and Toyota Motor Corporation (ADR) (NYSE:TM) are doing fine and dandy while bringing capital appreciation to their investors, I believe their outlook may be troublesome.