We had yet another week full of important economic data. Everything from retail sales, housing, and inflation was covered on top of the highly anticipated testimony from no other than Ben Bernanke himself. Ben Bernanke emphasized in his second day of Congressional testimony that monetary policy will remain loose for the foreseeable future, a bullish catalyst for a stock market already at all time highs. Within the question and answer segment, Bernanke stated:

He went onto say it was too early to tell when the Federal Reserve would begin the taper, an extension of exuberance if nothing else. Earlier in week, the Commerce Department provided its most update retail sales statistics for the month of June. The department announced retail
sales rose 0.4% in June from May, this increase comes after a slightly stronger 0.5% increase during the previous month.

Within the report, both auto and furniture sales performed exceptionally better than the rest of the core categories. Auto sales rose 1.8% as a result of improving credit quality and demand seen for trucks in particular. Moreover, furniture sales rose an astounding 2.4% as new homeowners and home buyers now need to furnish their newly purchased properties.

On the other side  department stores, electronics, and home improvement stores performed weaker than some had hoped. In this article, I would like to cover a few names related to the most recent consumer confidence data as well as provide forward looking analysis. 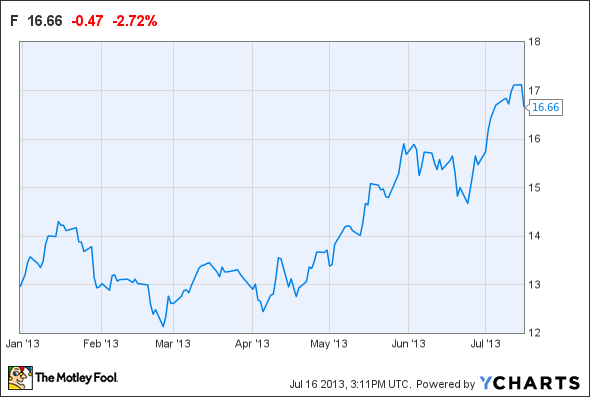 Shares have traded higher by 30% this year, with a great proportion of the appreciation coming in recent weeks. However, shares moved sharply lower last week as one analyst from Goldman Sachs downgraded the company from “conviction buy” to “buy” while raising his price target from $17 to $20. If shares continue to drop, I would be inclined to pick up a position on the pullback.

Earlier this month, the company reported that its U.S. June sales grew 13% compared to a year ago, marking Ford Motor Company (NYSE:F)’s best June sales results since 2006. Within the report, the company announced car sales improved 12%, utilities improved 8%, and trucks improved a whopping 20%.

Going forward, I would expect the company’s truck segment to continue to perform well amid the housing recovery. Over the last couple of years, it seems likely that construction and industrial companies may have put off their vehicle refresh cycles, but are now in a position to buy again as demand for their services remains high.

Everything and anything related to the housing sector has performed well this year. So, it’s not surprising that Lowe’s Companies, Inc. (NYSE:LOW) shares have also done well. 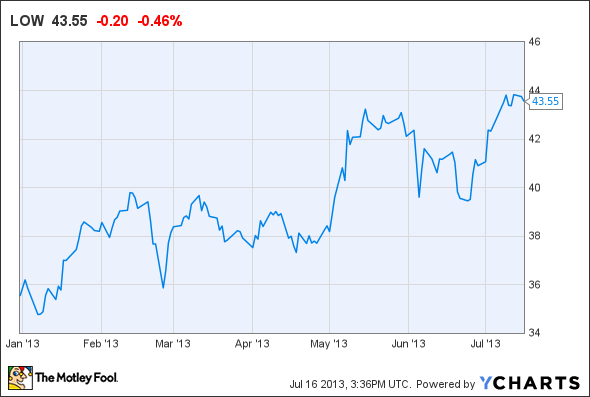 While pulling back a tad from their highs, shares have still moved higher by an incredible 23% year to date on the back of strong housing data. In the latest consumer confidence report, the home improvement space didn’t fare as well during the month of June as some had hoped. During the month of June, retail sales amid home improvement names dropped 2.2%, however, some pullback is expected after the 10% growth seen over the past year.

Recently, the National Association of Home Builders reported the third monthly gain for the index, now at 57 in July. While it may not feel like it yet in all parts of the country, this level of confidence hasn’t been seen since 2006. Looking ahead, the continuance of strong housing data amid rising interest rates bodes well for the entire home improvement space, Lowe’s Companies, Inc. (NYSE:LOW) included. As we begin to see foreclosures rolling off the market, it seems likely that we will see these same properties improve with the help of their new owners.

I watch the HGTV as much as the next guy, and after years of in depth research, I can tell you painting is one of the easiest and most frequent improvement both sellers and buyers consider before and after the sale. For sellers, it is a great idea to touch up their walls with a plain, neutral color in order to avoid turning off any one buyer.