In order to turn up some value ideas in the consumer goods sector, I ran a simple scan which turned up three names. The metrics used were companies with market caps of over $2 billion, a dividend yield over 3%, and a trailing P/E ratio of less than 15. The three consumer stocks that met this criteria were Ford Motor Company (NYSE:F), Lorillard Inc. (NYSE:LO) and Pitney Bowes Inc. (NYSE:PBI). Below, we take a closer look at these three stocks to determine if they may be good values at current levels.

This company certainly had its struggles during the heart of the financial crisis, but Ford has come storming back in recent years. In fact, the automaker has been restored back to health enough that the stock currently offers a nice dividend yield. Ford Motor Company (NYSE:F)’s prospects going forward are largely tied to macroeconomic trends such as GDP growth, income growth, home prices and the job market. A strengthening economy in 2013 should be good for car sales, but revenue growth at Ford in recent years has been flat to down. 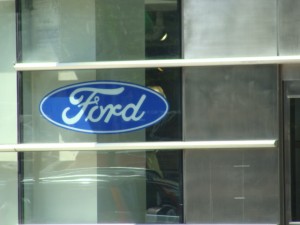 On March 2, auto and truck sales data was released showing that auto sales declined for the month, but truck sales rose slightly. Roughly 5.3 million cars were sold in March compared to 5.5 million in February. Light truck sales came in at 6.7 million compared to 6.6 million in February. Although the data was hardly spectacular, the Big 3 domestic automakers all gained market share in the period with GM and Ford Motor Company (NYSE:F) leading the way with 6% year over year sales increases.

Although Ford shares have underperformed the stock market over the last year, only rising less than 2%, Ford has been in an uptrend in recent months. From a valuation perspective, the stock looks attractive as Ford is trading at a trailing P/E of under 9 and is yielding right around 3% at current levels. In order for an investment in Ford Motor Company (NYSE:F) to pay off, however, the company needs to be able to grow its top line and consistently raise margins. Although this is a steep task in the highly competitive auto industry, the stock appears to be priced for upside if the economy can continue to accelerate going forward.

From an investment perspective, it is hard not to like this stock. The manufacturer of Newport brand cigarettes has been a stellar long-term performer and operates a consistent, conservative business that throws off a lot of cash. Although net income growth has been stagnant in recent years, Lorillard Inc. (NYSE:LO) has continued to grow its sales. In addition to Lorillard’s safe and steady business, the stock is attractive because of its roughly 5.50% dividend yield.

Lorillard is one of a number of tobacco stocks that have made investors a lot of money over the last decade with a combination of large capital gains and generous dividend payouts. The key for the company going forward will be fighting for market share for its Newport brand and growing sales. Investors would also be enthusiastic about any margin expansion that Lorillard Inc. (NYSE:LO) could show Wall Street in coming quarters. The company recently did a 3-1 stock split and this could also be a catalyst as it has increased liquidity in the name. Shares currently trade at a P/E of roughly 14.50 and analysts see upside in the name with a price target of $45.