Since the financial collapse and ensuing stock market crash, we’ve witnessed one of the greatest bull markets in history. Look at the graph below displaying how the S&P 500 has soared since February 2009. 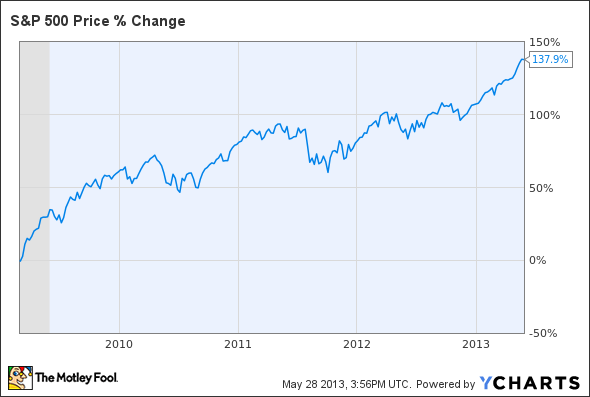 Warren Buffet’s quote, “Be fearful when others are greedy, and greedy when others are fearful”, seems to fit our current situation quite well. With the market sitting near record highs it has some investors so nervous about a potential pullback that it’s making them cautious to invest in the market – and that’s understandable. But there are always values to be found, and profits to be had. Ford Motor Company (NYSE:F) and General Motors Company (NYSE:GM) are two stocks that have a sustainable and profitable future, and could be two of the best stocks to invest in right now.

Market share
In the first quarter this year, Detroit’s Big Three accomplished something that hadn’t been done in 20 years – all three gained market share. “The renaissance in Detroit is real,” AutoNation CEO Mike Jackson told AutoNews in a telephone interview. “They have fantastic new products, and they’re in a very good position to compete.”

The good news is that Ford Motor Company (NYSE:F)’s market share is expected to increase this May compared to last year, according to TrueCar. It forecasts Ford to improve its share in the U.S. from 15.5% to 17.2%, while General Motors Company (NYSE:GM) is expected to stay flat at 18.5%. For GM, staying flat is better than losing share, as rival Toyota is forecast to drop from 15.3% to 14.9%.

Leaner operations
Ford Motor Company (NYSE:F)’s CEO Alan Mulally established his “One Ford” vision and it’s paying off big-time. The company is producing more profits than GM, off lower revenue, because it’s running so efficiently. The good news for General Motors Company (NYSE:GM) is that it’s potential isn’t as tapped as Ford’s right now. It expects to improve operations and significantly boost profits and margins by mid-decade.

Analysts estimate that Detroit automakers are running lean enough to break even or produce slim profits if the U.S. automotive market breaks 10 million units in sales. That’s great news, as the previous break-even mark was 16 million units, and the SAAR is standing just above 15 million right now.

Future lineup
Lean operations are a huge reason for excitement with investors, but it gets better. Both companies are having success with new models. Consider that Ford can’t make enough Fusions or Escapes to keep its inventories as high as it would like. Plants that produce the Fusion are said to be running at 114% capacity, making each sedan rolling off the line more profitable than the last. Ford is bringing extra capacity to plants next year and is shortening its standard summer shutdown in half. Ford Motor Company (NYSE:F) gets it now, and will continue to produce vehicles that strike the right balance of design and value with consumers – a great sign for investors.