When I think of a distinctly American vehicle, I usually don’t think of a Ford Motor Company (NYSE:F) Mustang or a Chevrolet Corvette from General Motors Company (NYSE:GM). I tend to think of RVs. Many other countries don’t have a market for RVs, due to the impracticality of owning one in an urban environment or the lack of RV campgrounds which offer water and electrical connections. By comparison, American roads offer incomparable freedom and a strong RV-centered infrastructure. Therefore, as U.S. auto sales have strengthened month after month, it doesn’t come as much of a surprise that RV sales have surged as well.

In April, RV manufacturers in the U.S., including Thor Industries, Inc. (NYSE:THO), Winnebago Industries, Inc. (NYSE:WGO), Forest River and Navistar International Corp (NYSE:NAV), shipped 32,100 RVs, a 19% increase from the previous year, according to a recent report from the Recreational Vehicle Industry Association (RVIA). At this rate, the RV industry could report its highest sales since 2007.

That’s an impressive comeback for an industry that most investors had left for dead, after total industry sales were slashed in half between 2007 and 2009. Although 9 million American households currently own RVs, the highest level ever recorded by the RVIA, sales could continue soaring as consumer confidence continues to rise. Favorable interest rates have also encouraged buyers to purchase more RVs, which generally sell for more than $70,000.

Back in 2009, the future looked bleak for Thor Industries, Inc. (NYSE:THO), the manufacturer of Four Winds, Airstream and Dutchman RVs. Mainstream automakers such as General Motors Company (NYSE:GM), Ford Motor Company (NYSE:F) and Chrysler were already having enough trouble selling regular cars to the public. With the economy crumbling rapidly, no one was looking to purchase a gas-guzzling RV. As a result, Thor’s stock dropped from $50 to $10 in two years. Yet despite that devastating plunge, Thor bounced back. 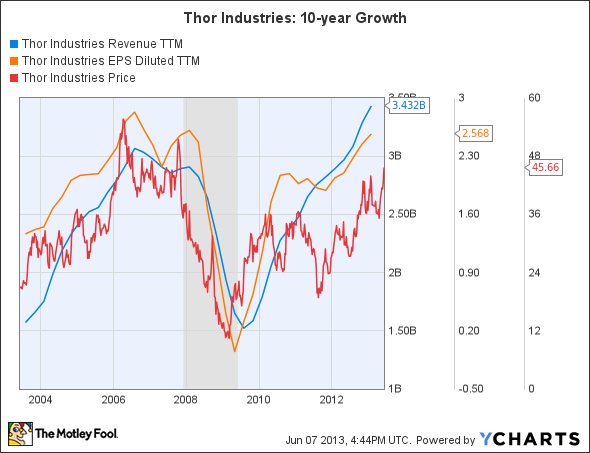 Today, Thor’s stock price has reclaimed the mid $40s, giving it a market cap of $2.4 billion. The company recently purchased a new factory in Wakarusa, Indiana to boost its output to meet market demand. Its workforce has increased 63% to 8,800 since 2009.

Thor’s recently reported third quarter earnings also confirmed this recovery. Its earnings rose 5.8% year-on-year to $0.83 per share, or $43.8 million. Adjusted earnings came in at $0.97 per share, topping the Thomson Reuters estimate by 8 cents. Revenue also rose 12% to $1.05 billion, in line with the consensus estimate.

Thor attributed its robust top and bottom-line growth to strong demand for its RVs. Total RV sales rose 15% to $929.8 million, and now account for 88.6% of its top line. Thor’s backlog of RVs rose 44.9% year-on-year. Sales of its higher-end RV coaches surprisingly outpaced sales of its lower-end towable motor homes. However, demand for both kinds of vehicles is expected to continue rising into the summer, when many Americans take long cross-country road trips.

Winnebago Industries, Inc. (NYSE:WGO), considerably smaller than Thor with a market cap of $587 million, is best known for its iconic Winnebago RV, probably the most recognized RV brand in America. Although the company reports earnings at the end of this month, its stock also soared after Thor’s upbeat earnings.