Should You Buy CSX Corporation (CSX)?

The government requires hedge funds and wealthy investors with over a certain portfolio size to file a report that shows their positions at the end of every quarter. Even though it isn’t the intention, these filings level the playing field for ordinary investors. The latest round of 13F filings disclosed the funds’ positions on September 30. We at Insider Monkey have made an extensive database of more than 700 of those elite funds and prominent investors’ filings. In this article, we analyze how these elite funds and prominent investors traded CSX Corporation (NYSE:CSX) based on those filings.

CSX Corporation (NYSE:CSX) was in 54 hedge funds’ portfolios at the end of the third quarter of 2018. CSX investors should be aware of an increase in enthusiasm from smart money recently. There were 52 hedge funds in our database with CSX positions at the end of the previous quarter. Our calculations also showed that CSX isn’t among the 30 most popular stocks among hedge funds.

To most shareholders, hedge funds are seen as underperforming, outdated financial tools of years past. While there are greater than 8,000 funds trading today, We look at the elite of this club, about 700 funds. These investment experts command the majority of the smart money’s total asset base, and by tracking their matchless stock picks, Insider Monkey has deciphered several investment strategies that have historically surpassed the broader indices. Insider Monkey’s flagship hedge fund strategy outstripped the S&P 500 index by 6 percentage points annually since its inception in May 2014 through early November 2018. We were able to generate large returns even by identifying short candidates. Our portfolio of short stocks lost 24% since February 2017 (through December 3rd) even though the market was up nearly 23% during the same period. We just shared a list of 11 short targets in our latest quarterly update. 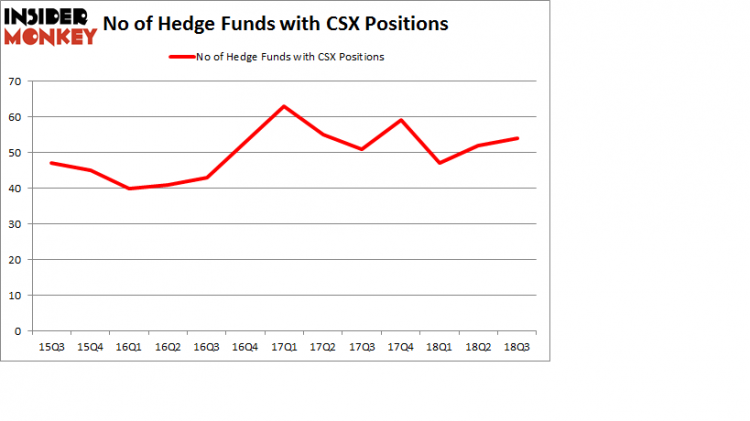 More specifically, Mantle Ridge LP was the largest shareholder of CSX Corporation (NYSE:CSX), with a stake worth $3166.8 million reported as of the end of September. Trailing Mantle Ridge LP was Egerton Capital Limited, which amassed a stake valued at $786.3 million. Lone Pine Capital, Millennium Management, and Steadfast Capital Management were also very fond of the stock, giving the stock large weights in their portfolios.

With a general bullishness amongst the heavyweights, some big names were breaking ground themselves. Scopus Asset Management, managed by Alexander Mitchell, initiated the most outsized call position in CSX Corporation (NYSE:CSX). Scopus Asset Management had $37 million invested in the company at the end of the quarter. Principal Global Investors’s Columbus Circle Investors also made a $26.8 million investment in the stock during the quarter. The other funds with new positions in the stock are Ken Heebner’s Capital Growth Management, Richard Gerson and Navroz D. Udwadia’s Falcon Edge Capital, and Paul Tudor Jones’s Tudor Investment Corp.

As you can see these stocks had an average of 50.5 hedge funds with bullish positions and the average amount invested in these stocks was $3.70 billion. That figure was $6.68 billion in CSX’s case. Activision Blizzard, Inc. (NASDAQ:ATVI) is the most popular stock in this table. On the other hand PNC Financial Services Group Inc. (NYSE:PNC) is the least popular one with only 40 bullish hedge fund positions. CSX Corporation (NYSE:CSX) is not the most popular stock in this group but hedge fund interest is still above average. This is a slightly positive signal but we’d rather spend our time researching stocks that hedge funds are piling on. In this regard ATVI might be a better candidate to consider a long position.