How do you pick the next stock to invest in? One way would be to spend hours of research browsing through thousands of publicly traded companies. However, an easier way is to look at the stocks that smart money investors are collectively bullish on. Hedge funds and other institutional investors usually invest large amounts of capital and have to conduct due diligence while choosing their next pick. They don’t always get it right, but, on average, their stock picks historically generated strong returns after adjusting for known risk factors. With this in mind, let’s take a look at the recent hedge fund activity surrounding Schlumberger Limited. (NYSE:SLB).

Is Schlumberger Limited. (NYSE:SLB) a buy here? Hedge funds are getting more optimistic. The number of bullish hedge fund positions improved by 12 recently. Our calculations also showed that SLB isn’t among the 30 most popular stocks among hedge funds.

At Q3’s end, a total of 55 of the hedge funds tracked by Insider Monkey were long this stock, a change of 28% from the previous quarter. The graph below displays the number of hedge funds with bullish position in SLB over the last 13 quarters. With hedge funds’ capital changing hands, there exists a select group of key hedge fund managers who were upping their stakes considerably (or already accumulated large positions). 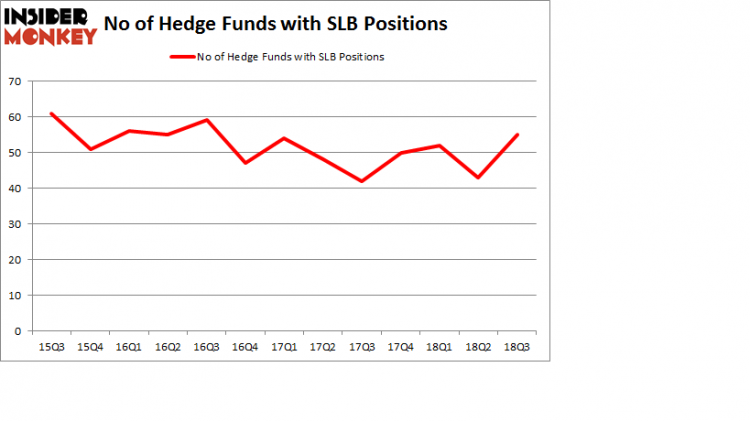 Among these funds, Fisher Asset Management held the most valuable stake in Schlumberger Limited. (NYSE:SLB), which was worth $400.7 million at the end of the third quarter. On the second spot was D E Shaw which amassed $182.3 million worth of shares. Moreover, International Value Advisers, Orbis Investment Management, and Ariel Investments were also bullish on Schlumberger Limited. (NYSE:SLB), allocating a large percentage of their portfolios to this stock.

Consequently, some big names have jumped into Schlumberger Limited. (NYSE:SLB) headfirst. Renaissance Technologies, managed by Jim Simons, established the most valuable position in Schlumberger Limited. (NYSE:SLB). Renaissance Technologies had $83 million invested in the company at the end of the quarter. Dmitry Balyasny’s Balyasny Asset Management also initiated a $50.6 million position during the quarter. The other funds with new positions in the stock are Alec Litowitz and Ross Laser’s Magnetar Capital, Israel Englander’s Millennium Management, and Ian Simm’s Impax Asset Management.

As you can see these stocks had an average of 33 hedge funds with bullish positions and the average amount invested in these stocks was $1.96 billion. That figure was $1.51 billion in SLB’s case. Morgan Stanley (NYSE:MS) is the most popular stock in this table. On the other hand ASML Holding N.V. (NASDAQ:ASML) is the least popular one with only 13 bullish hedge fund positions. Compared to these stocks Schlumberger Limited. (NYSE:SLB) is more popular among hedge funds. Considering that hedge funds are fond of this stock in relation to its market cap peers, it may be a good idea to analyze it in detail and potentially include it in your portfolio.