Is American Express Company (NYSE:AXP) a good bet right now? We like to analyze hedge fund sentiment before doing days of in-depth research. We do so because hedge funds and other elite investors have numerous Ivy league graduates, expert network advisers, and supply chain tipsters working or consulting for them. There is not a shortage of news stories covering failed hedge fund investments and it is a fact that hedge funds’ picks don’t beat the market 100% of the time, but their consensus picks have historically done very well and have outperformed the market after adjusting for risk.

Is American Express Company (NYSE:AXP) a buy, sell, or hold? The smart money is getting more bullish. The number of long hedge fund bets advanced by 3 in recent months. Our calculations also showed that AXP isn’t among the 30 most popular stocks among hedge funds. AXP was in 50 hedge funds’ portfolios at the end of September. There were 47 hedge funds in our database with AXP holdings at the end of the previous quarter.

What have hedge funds been doing with American Express Company (NYSE:AXP)?

At Q3’s end, a total of 50 of the hedge funds tracked by Insider Monkey held long positions in this stock, a change of 6% from the second quarter of 2018. The graph below displays the number of hedge funds with bullish position in AXP over the last 13 quarters. With hedgies’ sentiment swirling, there exists an “upper tier” of notable hedge fund managers who were increasing their holdings considerably (or already accumulated large positions). 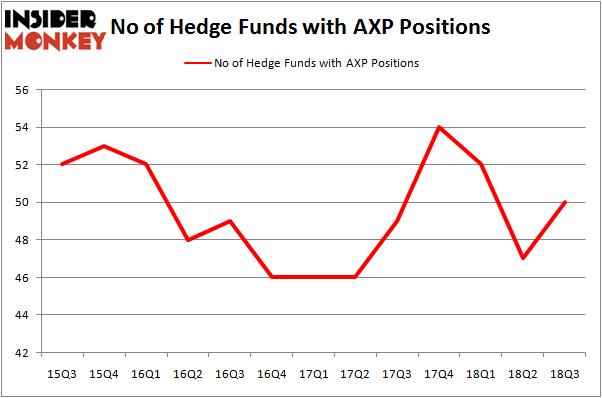 Among these funds, Berkshire Hathaway held the most valuable stake in American Express Company (NYSE:AXP), which was worth $16145 million at the end of the third quarter. On the second spot was Fisher Asset Management which amassed $1103 million worth of shares. Moreover, Third Point, GAMCO Investors, and First Pacific Advisors LLC were also bullish on American Express Company (NYSE:AXP), allocating a large percentage of their portfolios to this stock.

With a general bullishness amongst the heavyweights, key money managers have jumped into American Express Company (NYSE:AXP) headfirst. Third Point, managed by Dan Loeb, created the biggest position in American Express Company (NYSE:AXP). Third Point had $532.5 million invested in the company at the end of the quarter. Dmitry Balyasny’s Balyasny Asset Management also made a $28.2 million investment in the stock during the quarter. The other funds with brand new AXP positions are Jeffrey Talpins’s Element Capital Management, David Rodriguez-Fraile’s BlueMar Capital Management, and Glenn Russell Dubin’s Highbridge Capital Management.

Let’s check out hedge fund activity in other stocks – not necessarily in the same industry as American Express Company (NYSE:AXP) but similarly valued. We will take a look at Caterpillar Inc. (NYSE:CAT), ConocoPhillips (NYSE:COP), Rio Tinto plc (NYSE:RIO), and Diageo plc (NYSE:DEO). This group of stocks’ market valuations are similar to AXP’s market valuation.

View table here if you experience formatting issues.
As you can see these stocks had an average of 38.25 hedge funds with bullish positions and the average amount invested in these stocks was $2.02 billion. That figure was $18.85 billion in AXP’s case. Caterpillar Inc. (NYSE:CAT) is the most popular stock in this table. On the other hand Diageo plc (NYSE:DEO) is the least popular one with only 15 bullish hedge fund positions. American Express Company (NYSE:AXP) is not the most popular stock in this group but hedge fund interest is still above average. This is a slightly positive signal but we’d rather spend our time researching stocks that hedge funds are piling on. In this regard CAT might be a better candidate to consider a long position.