Deckers Outdoor Corp (NASDAQ:DECK), best known for its Ugg sheepskin boots, has had a rough year. The Goleta, Calif.-based company struggled with rising commodity costs, lower margins and declining sales over the past year, and shares lost half their value as investors fretted over the questionable future popularity of its Ugg boots.

However, the stock finally caught a break after its fourth quarter earnings topped Wall Street expectations and the company projected strong top line growth next year. Is Deckers finally worth a look for bottom-fishing value investors, or is this just another soggy boot caught on the fishing rod?

For its fourth quarter, Deckers Outdoor Corp (NASDAQ:DECK) earned $98 million – a 22.9% decline from the prior year quarter. Diluted earnings per share came in at $2.77 per share, down from $3.18 per share a year earlier, but still topped the Thomson Reuters consensus of $2.61.

For the full year, Deckers’ profit was down 36.1% from the prior year to $129 million. Revenue was approximately the same at $1.4 billion.

While those numbers looked mediocre, it was the company’s guidance – which forecast sales growth of 7% in 2013 – that propelled the stock to rally 15% on March 1.

Deckers intends to open over 100 company-owned stores globally over the next three years. This is roughly in line with its prior expansion effort in fiscal 2012, when it added 30 new stores.

During the fourth quarter, Decker’s Ugg sheepskin boots – its best-selling product – generated $584 million, or 96.4% of the company’s total revenue.

At this rate, Deckers should change its ticker from DECK to UGG since it has become completely dependent on a single brand. Total revenue from Ugg sales rose 2.9% from the prior year quarter, which the company attributed to a colder winter season.

A look at Deckers’ revenue quarterly growth over the past five years reveals the cyclical importance of colder seasons – making the fourth quarter the company’s most important reporting period. 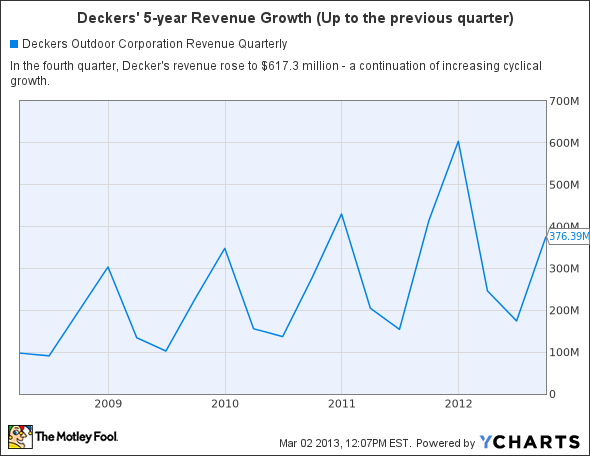 However, analysts have expressed concern that Ugg is losing its exclusive appeal due to its widespread availability at discount retailers such as Marshalls, and from a variety of discount e-commerce sites.

Decker’s other brands, though dwarfed by Ugg’s sales, showed mixed signs of growth during the fourth quarter.

Sanuk, its flip-flops and sandals brand, grew sales 39.2% to $15.3 million. Deckers expects Sanuk sales to rise 15% during the year.

But Teva, which sells sandals, hiking shoes and water shoes, posted a 29.5% sales decline to $13.7 million.

Due to Deckers’ heavy dependence on Ugg, rising costs for sheepskin and other raw materials are a major threat to the company’s margins. Throughout the first half of the year, Deckers raised prices on its Ugg boots to offset those rising costs – resulting in a decline in sales volume.

Last fall, the company cut the cost of the boots to revive sales. As a result, gross margin dropped from 51.0% to 46.3%. 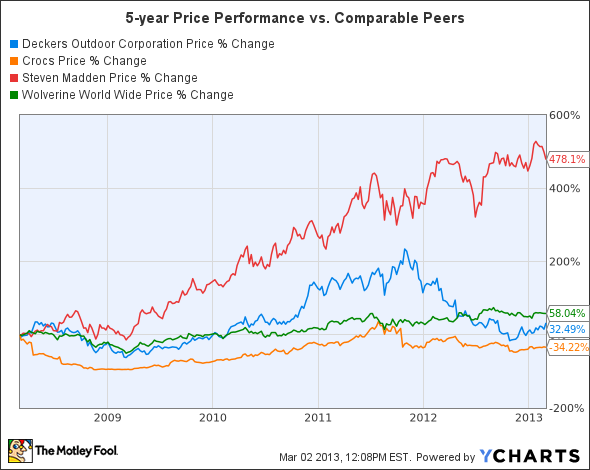 Over the past five years, Deckers’ stock price has performed fairly poorly against its market peers. Higher-end footwear retailer Steven Madden, Ltd. (NASDAQ:SHOO) has fared the best, while Wolverine World Wide, Inc. (NYSE:WWW) – the parent company of Hush Puppies and Merrell – has been held up by strong demand for its diverse products.

Deckers was only able to outperform long-struggling Crocs, Inc. (NASDAQ:CROX), which faces a similar problem – being overly exposed to a single line of cyclical products. Both Ugg boots and Crocs have also been disparagingly called “broken fads” by the media.

The past twelve months were even worse for Deckers, which lost nearly half its market cap prior to earnings due to increasingly bearish sentiment due to its aforementioned woes balancing price with demand.

But after such a plunge, followed by its post-earnings rebound, is the stock fundamentally attractive versus these peers?

Although Crocs is the most undervalued of the bunch, Deckers comes in at a close second, with low debt and strong profit margins. As we can see in the next chart, it also has little trouble keeping revenue growth chugging along. 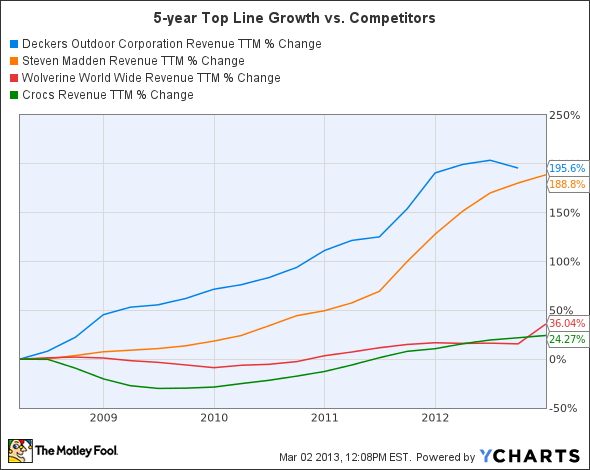 However, its bottom line growth looks a bit less dependable, and has been in constant decline since the beginning of 2012. 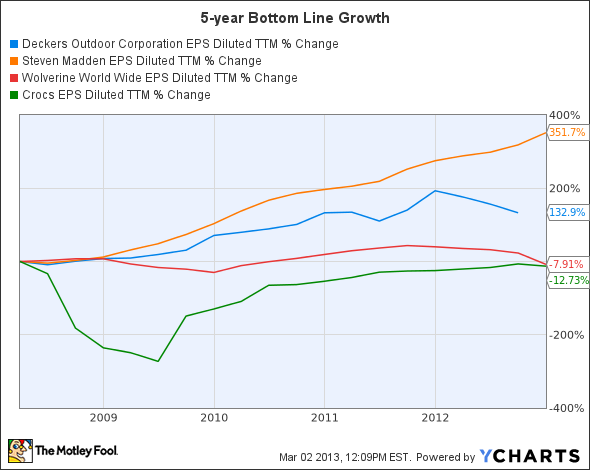 Deckers has posted strong earnings growth over the past five years, but it fails to match Steven Madden’s comparably stable growth, due to the cyclical nature of Ugg boots. The slide at the start of 2012 was exacerbated by its failed attempt to raise prices throughout the year.

Deckers’ most recent earnings are encouraging and suggest robust growth in 2013. However, the company’s key problem is its complete dependence on the Ugg brand, which in turn is dependent on shifting fashion trends and weather conditions. Although Ugg boots have been a fashion trend since the late 1990s, it is far too early to consider the product a timeless one.

To continue growing, Deckers must repeatedly report increasing fourth quarter top and bottom line gains, reflecting positive growth in its Ugg segment – or face dire consequences. Therefore, more diversified footwear retailers – such as NIKE, Inc. (NYSE:NKE), Steven Madden or Wolverine Worldwide – are safer investments than companies like Deckers and Crocs, which are too dependent on sales of single or similar products.

The article For Deckers, it’s Ugg or Bust! originally appeared on Fool.com and is written by Leo Sun.