FMC Corp (NYSE:FMC): Are Hedge Funds Right About This Stock?

The 700+ hedge funds and money managers tracked by Insider Monkey have already compiled and submitted their 13F filings for the second quarter, which unveil their equity positions as of September 30. We went through these filings, fixed typos and other more significant errors and identified the changes in hedge fund positions. Our extensive review of these public filings is finally over, so this article is set to reveal the smart money sentiment towards FMC Corp (NYSE:FMC).

Hedge fund interest in FMC Corp (NYSE:FMC) shares was flat at the end of last quarter. This is usually a negative indicator. The company had 37 smart money investors with long positions, hence it wasn’t one of the 30 most popular stocks among hedge funds in Q3 of 2018. At the end of this article we will also compare FMC to other stocks including Viacom, Inc. (NASDAQ:VIAB), EQT Corporation (NYSE:EQT), and The J.M. Smucker Company (NYSE:SJM) to get a better sense of its popularity.

In today’s marketplace there are a lot of indicators shareholders employ to value their holdings. Some of the most useful indicators are hedge fund and insider trading signals. We have shown that, historically, those who follow the top picks of the top investment managers can outclass the broader indices by a healthy margin (see the details here).

While researching further about FMC Corp (NYSE:FMC), we tracked down Corsair Capital Management’s investor letter from July, in which, the fund shares its positive expectations about the company’s business.

“FMC Corp. (“FMC”) recouped most of its first quarter 2018 decline, rising 17% during the second quarter. The company reported another “beat-and-raise,” confirming our thesis that the acquisition of crop protection assets from DowDuPont (“DWDP”) would drive significant earnings accretion and that Lithium revenue and EBITDA would continue to ramp. Management’s 2018 earnings guidance range is now $5.90-$6.20 per share, and we expect 2019 earnings to exceed $7.00 per share. We also believe that as FMC’s net leverage drops closer to 2.0x EBITDA in 1H 2019, there is a high likelihood that the company’s Board will authorize a material share repurchase program. A buyback program, significant earnings growth and the upcoming spinoff of the Lithium segment in early 2019 should drive the stock closer to our view of fair value of $120 per share. FMC shares finished the second quarter at $89.22.”

In spite of Corsair Capital Management’s positive outlook on the company, we are still not sure if it represents a good buy opportunity at the moment, which is why we’re going to take a peek at the new hedge fund action surrounding it.

Heading into the fourth quarter of 2018, a total of 37 of the hedge funds tracked by Insider Monkey held long positions in this stock, same as in the previous quarter. By comparison, 35 hedge funds held shares or bullish call options in FMC heading into this year. With hedgies’ capital changing hands, there exists a few notable hedge fund managers who were adding to their holdings considerably (or already accumulated large positions). 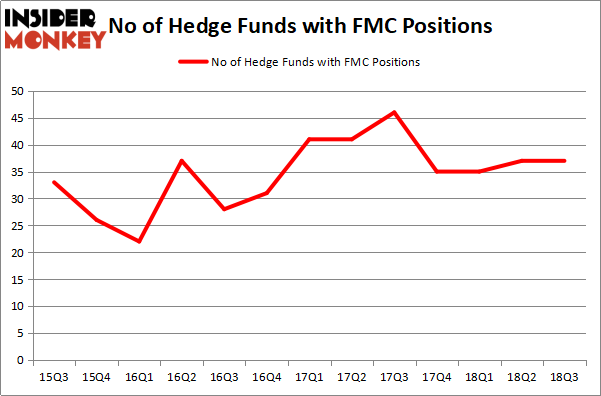 According to publicly available hedge fund and institutional investor holdings data compiled by Insider Monkey, Glenview Capital, managed by Larry Robbins, holds the most valuable position in FMC Corp (NYSE:FMC). Glenview Capital has a $743.4 million position in the stock, comprising 4.7% of its 13F portfolio. The second most bullish fund manager is Aaron Cowen of Suvretta Capital Management, with a $263.3 million position; 6.1% of its 13F portfolio is allocated to the company. Some other members of the smart money that hold long positions contain David Fear’s Thunderbird Partners, James Dinan’s York Capital Management and Ken Griffin’s Citadel Investment Group.

Because FMC Corp (NYSE:FMC) has faced bearish sentiment from the entirety of the hedge funds we track, we can see that there is a sect of money managers who were dropping their positions entirely by the end of the third quarter. Interestingly, Christopher A. Winham’s Tide Point Capital cut the biggest position of the 700 funds tracked by Insider Monkey, totaling an estimated $28 million in stock, and Jim Simons’ Renaissance Technologies was right behind this move, as the fund cut about $22.9 million worth. These moves are interesting, as total hedge fund interest stayed the same (this is a bearish signal in our experience).

As you can see these stocks had an average of 32 hedge funds with bullish positions and the average amount invested in these stocks was $1.14 billion. That figure was $1.88 billion in FMC’s case. EQT Corporation (NYSE:EQT) is the most popular stock in this table. On the other hand New Oriental Education & Tech Grp (NYSE:EDU) is the least popular one with only 25 bullish hedge fund positions. FMC Corp (NYSE:FMC) is not the most popular stock in this group but hedge fund interest is still above average. This is a slightly positive signal but we’d rather spend our time researching stocks that hedge funds are piling on. In this regard EQT might be a better candidate to consider a long position.