We can judge whether FLIR Systems, Inc. (NASDAQ:FLIR) is a good investment right now by following the lead of some of the best investors in the world and piggybacking their ideas. There’s no better way to get these firms’ immense resources and analytical capabilities working for us than to follow their lead into their best ideas. While not all of these picks will be winners, research shows that these picks historically outperformed the market when we factor in known risk factors.

Is FLIR Systems, Inc. (NASDAQ:FLIR) a bargain? The best stock pickers are in a bullish mood. The number of bullish hedge fund bets increased by 1 in recent months. Our calculations also showed that FLIR isn’t among the 30 most popular stocks among hedge funds.

What does the smart money think about FLIR Systems, Inc. (NASDAQ:FLIR)? 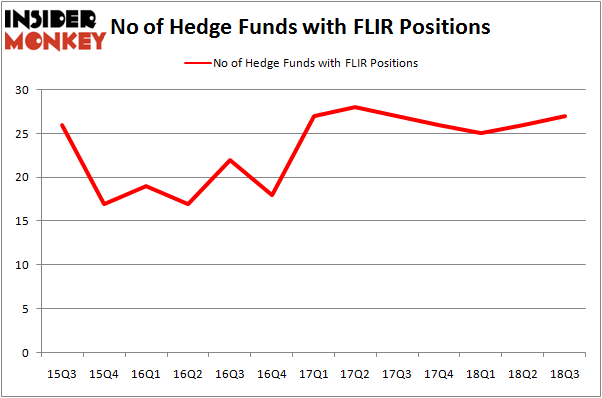 The largest stake in FLIR Systems, Inc. (NASDAQ:FLIR) was held by AQR Capital Management, which reported holding $162.1 million worth of stock at the end of September. It was followed by Royce & Associates with a $102.4 million position. Other investors bullish on the company included D E Shaw, Columbus Circle Investors, and Two Sigma Advisors.

As aggregate interest increased, key money managers were breaking ground themselves. Point72 Asset Management, managed by Steve Cohen, created the biggest position in FLIR Systems, Inc. (NASDAQ:FLIR). Point72 Asset Management had $1.5 million invested in the company at the end of the quarter. Paul Marshall and Ian Wace’s Marshall Wace LLP also made a $1.3 million investment in the stock during the quarter. The other funds with new positions in the stock are Jeffrey Talpins’s Element Capital Management, Matthew Hulsizer’s PEAK6 Capital Management, and George Zweig, Shane Haas and Ravi Chander’s Signition LP.

View table here if you experience formatting issues.
As you can see these stocks had an average of 26.75 hedge funds with bullish positions and the average amount invested in these stocks was $705 million. That figure was $559 million in FLIR’s case. WPX Energy Inc (NYSE:WPX) is the most popular stock in this table. On the other hand IPG Photonics Corporation (NASDAQ:IPGP) is the least popular one with only 16 bullish hedge fund positions. FLIR Systems, Inc. (NASDAQ:FLIR) is not the most popular stock in this group but hedge fund interest is still above average. This is a slightly positive signal but we’d rather spend our time researching stocks that hedge funds are piling on. In this regard WPX might be a better candidate to consider a long position.