First Solar, Inc. (NASDAQ:FSLR) has been a tough stock to own over the last five years, down over 85%. 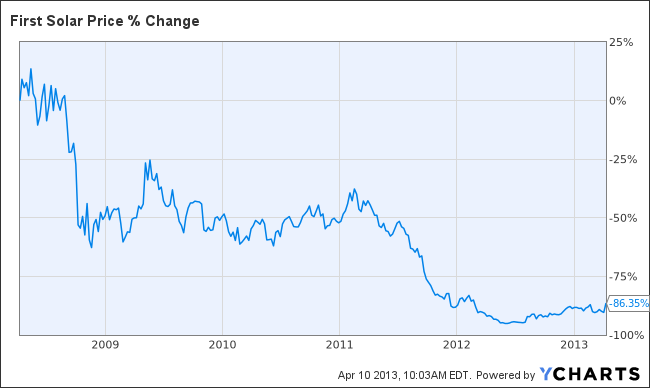 I don’t think the volatility stops with First Solar’s revised upward guidance. The stock could be well poised to see a pullback. As with its solar peers, the company has been plagued by an oversupply of products, with the current macro scenario not boding well for the solar industry, which thrives on subsidies and grants.

The solar markets of Europe, Asia, and Canada all dependent on subsidy or tariff programs. However, European governments are opting for a gradual reduction in feed-in-tariffs and Ontario, Canada has started reducing the amount of subsidy it provides.

Some of First Solar’s major competitors include SunPower Corporation (NASDAQ:SPWR) and MEMC Electronic Materials, Inc. (NYSE:WFR), with SolarCity Corp (NASDAQ:SCTY) being a derivative play on the solar industry since the company is an installer of panels, rather than a supplier. The big news from First Solar, Inc. (NASDAQ:FSLR) has been an industry position – a rising tide really does lift all boats. 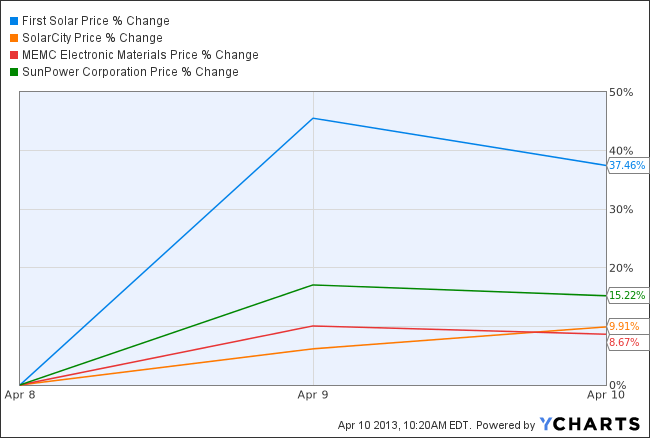 The company hopes to prepare for potential demand increases by increasing its manufacturing scale. However, there are headwinds there, too. Governments play a big role in solar panel success, including Germany, Italy, Spain, France, Greece, Portugal, China, South Korea, Japan, Canada, and the U.S., which all subsidize photovoltaic product manufacturers in the form of feed-in tariffs, rebates, and tax incentives.

MEMC Electronic Materials, Inc. (NYSE:WFR) is the leading producer of silicon wafers for the semiconductor industry. High prices during shortages result in impressive profits for the industry, but when there’s too much capacity, there’s a large supply-demand imbalance and massive losses for suppliers. The latest shortage in the semiconductor wafer industry occurred from 2004 to 2008, which actually allowed MEMC Electronic Materials, Inc. (NYSE:WFR) to post impressive financial results.

MEMC Electronic Materials, Inc. (NYSE:WFR) managed to post a decent fourth quarter, but revenue decreased on a year-over-year basis, with solar systems sales lower than expected, and the company opted not to provide 2013 guidance.