For nearly a decade First Solar, Inc. (NASDAQ:FSLR) has paced the solar industry. The company’s thin-film solar modules were by far the most affordable per watt when the industry was emerging in the 2000s, and it generated a gross margin of over 50% for a period of time.

But First Solar is no longer the dominant player it once was. Competition from China rapidly lowered the cost of polysilicon panels and the company’s cost leadership has evaporated. To make matters worse, as the cost of modules has fallen, efficiency has become more important and First Solar, Inc. (NASDAQ:FSLR) has effectively been forced out of the residential solar market. Add all of this up and margins have dropped, and so has First Solar stock along with them. 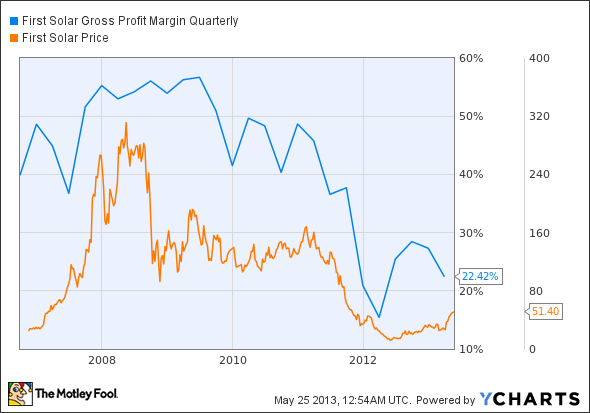 To make up for these challenges First Solar has made some bold moves recently. It bought start-up TetraSun, who can supposedly build polysilicon panels at high efficiencies and low cost. In theory, this will eventually allow First Solar to focus on areas outside of utility-scale solar.

Utility-scale solar drives the business
Where First Solar, Inc. (NASDAQ:FSLR) still has a significant lead is in utility-scale solar, where module cost per watt and installation efficiencies mean more than in smaller installations. But for utility-scale projects to drive the business, a company needs to continue adding projects to make up for projects built in a quarter. That’s why it’s of concern that backlog has fallen from 3.0 GW six months ago to 2.5 GW today.

The company’s economies of scale may not lead to industry leading margins for much longer either. SunPower Corporation (NASDAQ:SPWR) is releasing C7 this year, which concentrates the sun’s rays seven times onto its high-efficiency solar cells. With a higher-efficiency offering SunPower can pack more solar onto the same land as First Solar, Inc. (NASDAQ:FSLR), which will put pressure on First Solar’s less-efficient modules as SunPower Corporation (NASDAQ:SPWR)’s costs drop.

MEMC Electronic Materials, Inc. (NYSE:WFR) is also transitioning from a solar supplier to a project builder, adding competition to the business. MEMC also has a larger 2.7 GW pipeline, although it doesn’t have the same history in utility-scale projects as First Solar.

The bottom line is that a lead in utility-scale solar isn’t durable without differentiating modules, which is where First Solar is falling behind.

No presence in residential solar
The biggest disadvantage for First Solar, Inc. (NASDAQ:FSLR) right now is that it doesn’t have exposure to the growing residential solar market. This is where SunPower and SolarCity Corp (NASDAQ:SCTY) are growing their leasing businesses and defining what the future of solar power will look like. It’s this distributed solar source that makes more financial sense than giant utility projects in the long term because they’ll have power consumed at the source and cut down on transmission and distribution costs.