As an energy investor, I have to look at industry trends to see where the next hot spot is. Throughout history, the hot energy commodity has never lasted long term, and trends can change on a dime. More recently, fracking has changed the game for oil and natural gas, coal is fighting to stay alive, and renewable energy is growing in some areas and struggling in others.

Below I’ve gone through the big trends to watch and what to consider while you’re investing.

Coal is the past
The coal industry is struggling — that’s not debatable at this point. Some might say that onerous regulation has been the biggest detriment to the coal industry in the last five years, but the truth is that cheap natural gas has done more than anything to hurt the industry. Sure, environmentalists and some politicians would prefer that we burn natural gas, but the flood of plant closures and bankruptcies of coal miners hasn’t been solely because of regulation.

Look at the consumption chart below and notice how both coal and oil have trended lower while natural gas has trended higher. Fracking changed the game for coal and there’s no stopping the move to natural gas (which I’ll get to in a minute). 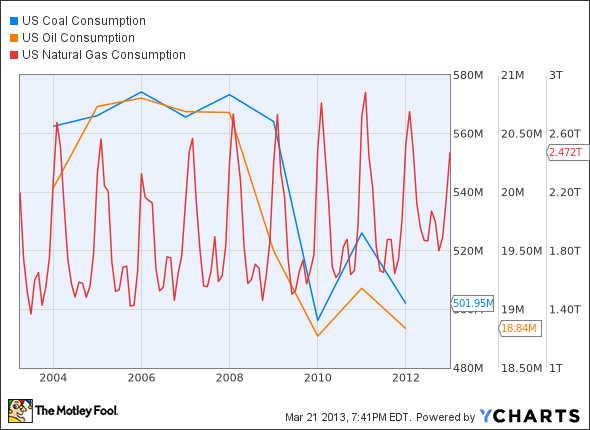 The decline in U.S. consumption is troubling for coal miners, but China’s move to rely less on coal and to produce more energy domestically has hurt U.S. exports. Now that China is getting into fracking in an effort to unlock its vast natural gas reserves, I’m afraid the best days are long behind the coal industry.

Oil and gas are still the heart of energy
Oil consumption in the U.S. is declining, but it’s still rising in developing countries, so prices haven’t taken a major hit in recent years. Unlike natural gas, oil is easily transported to the market that will pay the most — now that China is the No. 1 oil importer in the world, oil still has a long run ahead of it.

Natural gas is the hottest commodity right now in the U.S. since fracking technology improved to the point where it can economically be removed from the ground. The cleaner-burning fuel is just now being adopted more widely for transportation, and the U.S. has a great opportunity to export cheap natural gas to the rest of the world.

Halliburton Company (NYSE:HAL) and Schlumberger Limited (NYSE:SLB) are two of the largest companies providing equipment and technology that make fracking possible; they’ll benefit as it expands around the globe. For investors, now may be the time to buy because rig counts have been falling due to low natural gas prices, but export terminals and natural gas fuel are on their way and they’ll help improve prices. Drillers should see a pickup in coming years that will benefit the patient investor.

Another way to play the steady demand for oil and growing use of natural gas is through offshore drillers, particularly in ultra-deepwater. Just this week, a well drilled by Anadarko Petroleum Corporation (NYSE:APC) gave our first look into what may be the largest discovery ever in the Gulf of Mexico. As explorers drill in more deepwater locations offshore they’ll continue to add to discovered reserves, which will lead to more drilling. This reinforcing loop will help rig owners like Seadrill Ltd (NYSE:SDRL) and Transocean Ltd (NYSE:RIG), who own large ultra-deepwater fleets and command in excess of $600,000 per day for these specialized rigs.