Hedge funds run by legendary names like Nelson Peltz and David Tepper make billions of dollars a year for themselves and their super-rich accredited investors (you’ve got to have a minimum of $1 million liquid to invest in a hedge fund) by spending enormous resources analyzing and uncovering data about small-cap stocks that the big brokerage houses don’t follow. Small caps are where they can generate significant outperformance. That’s why we pay special attention to hedge fund activity in stocks like First Data Corp (NYSE:FDC).

Hedge funds are big fans of First Data Corp, as their ownership of the stock nearly doubled between the middle of 2017 and the middle of 2018. 49 hedge funds were long FDC on June 30, a 36% quarter-over-quarter jump, with shares gaining 25% during that time. In comparison, rival payments processing company Square, Inc. (NASDAQ:SQ) was owned by just 29 hedge funds in the middle of 2018. First Data Corp is also one of 25 Stocks Billionaires Are Piling On, being owned by the likes of Larry Robbins’ Glenview Capital (26.7 million shares) and Steve Cohen’s Point72 Asset Management (10.32 million shares). Susquehanna’s James Friedman also recently suggested that investors look from Square to First Data instead, claiming that FDC’s Clover has been performing about as well as Square’s own offerings, while the stock trades at a considerable valuation discount.

In the financial world there are several metrics stock traders employ to assess publicly traded companies. A pair of the most under-the-radar metrics are hedge fund and insider trading indicators. Our researchers have shown that, historically, those who follow the top picks of the elite hedge fund managers can outpace the market by a healthy margin (see the details here). 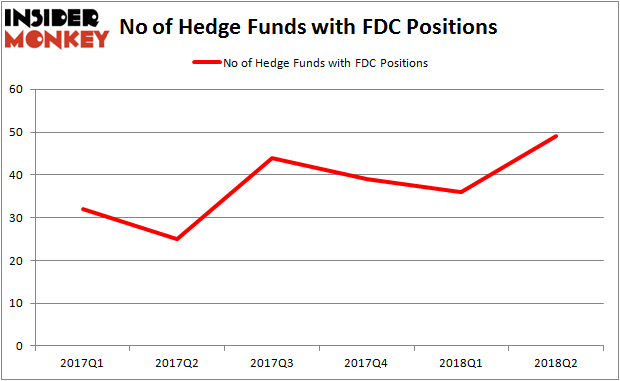 According to Insider Monkey’s hedge fund database, Glenview Capital, managed by Larry Robbins, holds the number one position in First Data Corp (NYSE:FDC). Glenview Capital has a $558.7 million position in the stock, comprising 3.8% of its 13F portfolio. The second-largest stake is held by Steadfast Capital Management, managed by Robert Pitts, which holds a $389.6 million position; the fund has 5.8% of its 13F portfolio invested in the stock. Some other hedge funds and institutional investors that are bullish encompass David Thomas’ Atalan Capital, Christopher Lord’s Criterion Capital and Will Cook’s Sunriver Management.

As you can see these stocks had an average of 25 hedge funds with bullish positions and the average amount invested in these stocks was $2.37 billion. That figure was $2.75 billion in FDC’s case. United Continental Holdings Inc (NYSE:UAL) is the most popular stock in this table. On the other hand Boston Properties, Inc. (NYSE:BXP) is the least popular one with only 11 bullish hedge fund positions. Compared to these stocks First Data Corp (NYSE:FDC) is more popular among hedge funds. Considering that hedge funds and billionaires are growing more and more bullish on this stock, it may be a good idea to analyze it in detail and potentially include it in your portfolio.